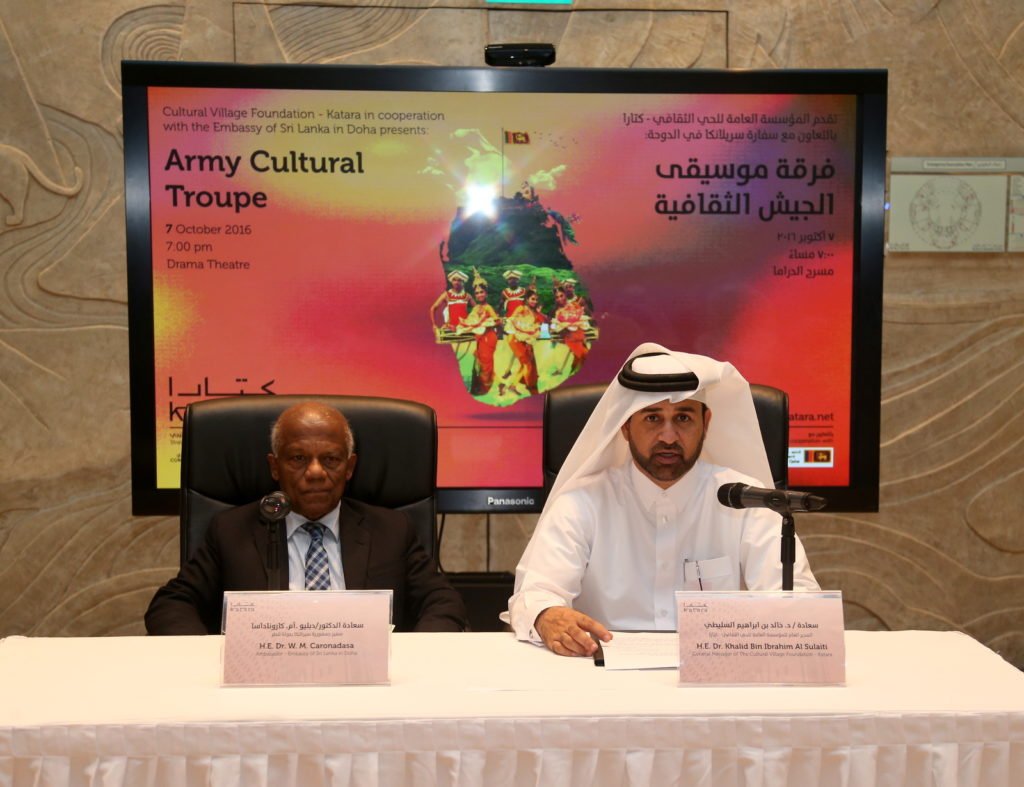 Doha- Katara: Stemming from its keenness to boost cooperation and cultural cooperation amongst all cultures, the cultural village Foundation-Katara will host Friday evening the Sri lankan performance of the Army Cultural troupe at the Drama theatre.

AlSulaiti said: “We hope this agreement will open new horizon for further cooperation in the fields of culture and information, and contribute to a deeper bilateral relation as it reflects the culmination of a collective effort and belief envisaging culture as a short path to better understanding and communication established between people of all walks of life. Almost nothing could be greater than arts, music and culture as means used to bolster our ties and make it more fruitful and powerful than ever. Culture remains the most vital platform that brings people together, to understand each other and to serve their interests in a peaceful and civilized way.”

He hoped that this cultural cooperation will pave the way for creating another milestone which lives up to the special relations between our two countries and a window to oversee and discover the rich, diversified and deeply-rooted culture of the Republic of Sri Lanka, which in its turn has old connections to the Arab and Islamic cultures, developed through the process of its evolution. These unique cultural interactions and links still live on through arts, music and
architecture as well as literature, theatre plays and visual arts.

Hailing the level of cooperation between both countries, the Sri Lankan envoy to Doha Prof. Dr. W. M. Karunadasa extended hope that the upcoming event of the Army Cultural Troupe will culminate the constructive mutual cultural ties between Qatar and Sri Lanka. He shed light on the fact that the folkloric Sri Lankan performance affected by geography and surrounding.

Sri Lankan enoy unveiled the fact that the army cultural troupe consists of 20 male and female performers that will be extended over one hour and followed by 20 minutes’ multicultural performance in which the Spanish, Indian and Arabic cultures are merged.

It is noteworthy that the army cultural troupe was founded 25 years ago and has performed in Australia, USA, France, Italy, UK, china, Malaysia and Thailand. It is first time that Sri Lankan Cultural Troupe is visiting to Middle East.