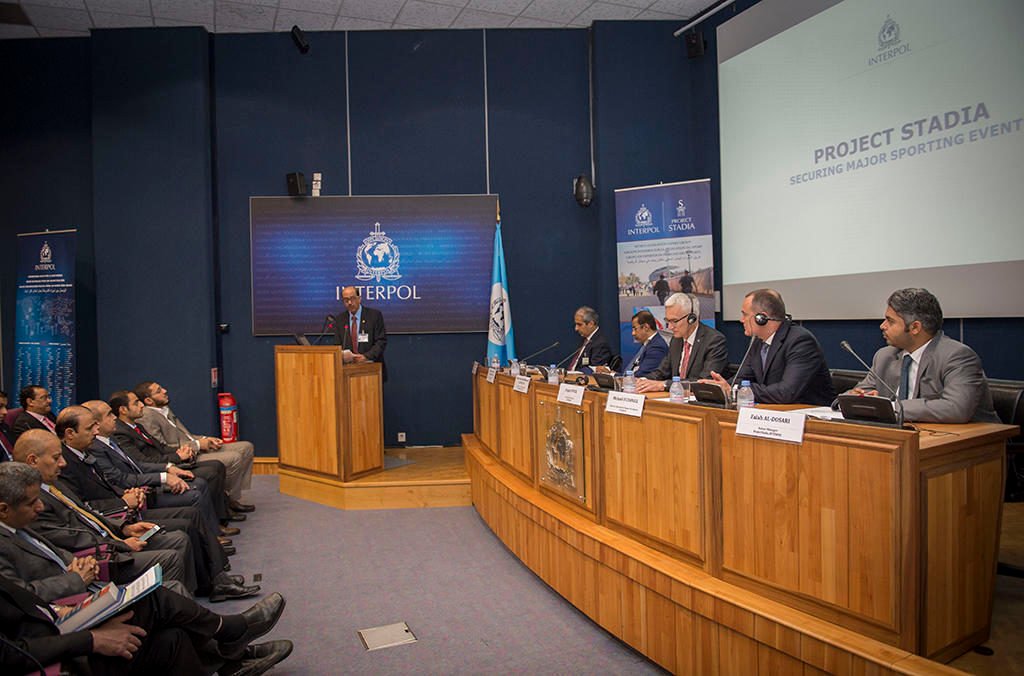 Project Stadia is a 10-year project funded by Qatar to develop a centre of excellence in major sporting event policing and security. The project is supporting Qatar’s preparations for the 2022 FIFA World Cup and those of other INTERPOL member countries hosting sporting competitions.
“The legacy Qatar aspires to in its preparations to host the 2022 tournament includes the transfer of knowledge and experience in various areas, including the legislative field, to help deliver a lasting framework on the safety of major sporting events,” said Qatar’s Chief of Police and Director General of Public Security, Major General Al Khulaifi.

“This meeting under INTERPOL’s Project Stadia is therefore part of our collective efforts to improve international standards in legislation and security efforts to ensure a safer future for sports worldwide,” added Major General Al Khulaifi.

INTERPOL Secretary General Jürgen Stock said the meeting was taking place in a changing international context, marked by new and evolving security concerns.
“From international terrorism to organized crime and cybercrime, our communities face an array of threats that we are collectively responsible for countering. These security threats are directly relevant to major sporting events and Project Stadia,” said Secretary General Stock.

“Legislation is crucial in shaping policing and security standards at major sporting events. Appropriate legislation provides law enforcement authorities with the powers they need to ensure the safety and security of all those involved,” added the INTERPOL Chief.

Almost a year after the Stade de France in Paris was targeted by terrorists, experts at the meeting heard that other recent experience demonstrates the challenges host countries face in securing sporting events.

Criminal activity was detected in the lead up to and during this year’s Olympics in Brazil, with reported terror activities disrupted immediately prior to the event, and with law enforcement also tackling opportunistic and organized crime, and cyber security threats.
The Euro 2016 football tournament in France saw incidents of football violence, and the murder of a French police officer and his wife in their home by an attacker who encouraged mass attacks directly against the tournament.

With members of Project Stadia and an INTERPOL Major Events Team (IMEST) deployed to both Rio 2016 and the Euro tournament, Brazilian and French officials are attending the meeting to share their experiences, further highlighting how INTERPOL and Project Stadia connect police worldwide against common challenges.

20 January 2022 By Ashraf Siddiqui More than 7,000 books of different ...
END_OF_DOCUMENT_TOKEN_TO_BE_REPLACED