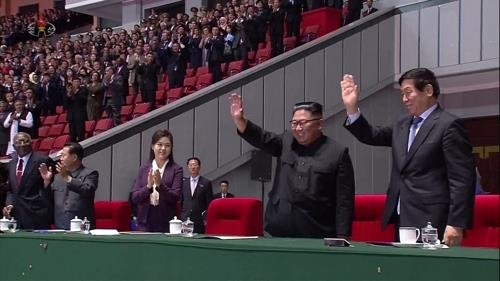 The Korean Central News Agency (KCNA) said that Kim arranged the event Monday for Li Zhanshu, a member of the Standing Committee of the Political Bureau of the Communist Party of China, and his delegation at the Mansudae Art Theater.

Kim and his wife, Ri Sol-ju, enjoyed the performance together with Li and members of his delegation, the KCNA report said, adding that the audience also included Kim’s younger sister, Kim Yo-jong; Choe Ryong-hae, vice chairman of the North’s ruling party; and Chinese ambassador to Pyongyang, Li Jinjun.

“Kim and Ri greeted the members of the Chinese party and government delegation at the lobby of the art theater. After exchanging warm greetings and posing for a photo with the Chinese guests, Kim had an amiable talk with them,” the report said.

Li, China’s No. 3-ranked official, arrived in Pyongyang on Saturday to celebrate the North’s 70th founding anniversary and deliver a personal letter from Xi to Kim.