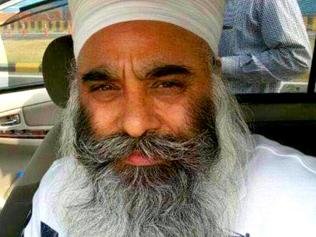 Khalistan Liberation Front Chief Harminder Mintoo and five others escaped from Nabha jail in Punjab on Sunday after armed men in police uniform tricked the sentries into opening the gates and bolted out with the inmates firing a hail of bullets. Among the escapees was another terrorist Kashmira Singh, according to Punjab police chief Suresh Arora, Indian media reported.

Sikh militants in Indian held Punjab are struggling for freedom from India.

In November 2014, 47-year-old Harminder Singh Mintoo was arrested by Punjab Police from the Indira Gandhi International airport on his return from Thailand. At the time of his arrest, Mintoo was accused of being involved in 10 terror-related cases.

Mintoo was using Thailand as his base to mobilize funds for the Indian banned organisation. He was using online resources to enlist support for the Khalistan cause and to radicalize youth. Using a fake Malaysian passport and identity card, Mintoo traveled extensively across Europe and South East Asia in order to develop contacts.

Origins of the Khalistan movement can be traced back to the British India when Sikhs started their movement for a separate homeland. The name was coined by Sikh leader, Dr. Vir Singh Bhatti in 1940.

While the demand for Khalistan was not granted, Jawaharlal Nehru assured the Sikhs of a semi-autonomous state in India. When partition took place, majority of the Sikhs from the Pakistani territory moved to India. Despite carving out a separate state for the Sikhs on liguistic lines, they continued to be a minority in the country.

The Operation Blue Star enacted by the Indira Gandhi led government to root out Bhindranwale along with his supporters from the Golden Temple, the assassination of Indira Gandhi and the anti-Sikh riots that followed ripened the Khalistan movement in India.

The immediate effect was a rise in militant activities by those favouring a separate Sikh state. A number of Khalistan militant outfits came into existence in India and abroad which included the Khalistan Commando Force, the All India Sikh Students Federation, the Babbar Khalsa and Khalistan Liberation Force (KLF)

The Khalistan Liberation Force was founded in 1986 by Aroor Singh and Sukhwinder Singh Babbar.

In 1995, the KLF was listed as one among four major militant groups in the Khalistan movement. Over the years they have been involved in a number of militant activities and assassinations, particularly in Punjab.