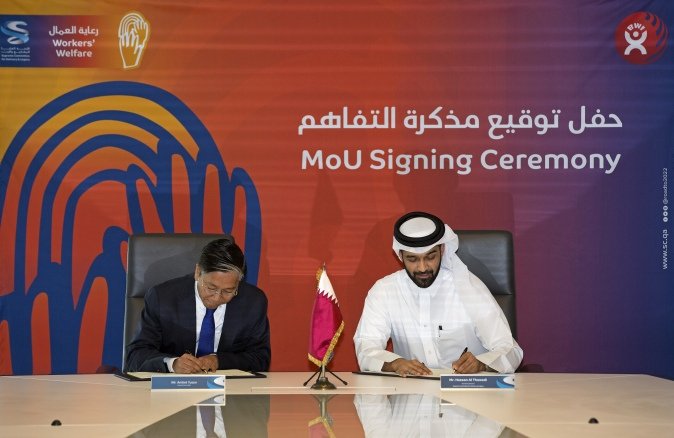 The first joint inspections on 2022 FIFA World Cup Qatar™ projects have been carried out by the Supreme Committee for Delivery & Legacy (SC) and Building and Wood Workers’ International (BWI), the global trade union for construction workers.

In accordance with a Memorandum of Understanding (MoU) signed by SC Secretary General H.E. Hassan Al Thawadi and BWI’s General Secretary, Ambet Yuson, in November 2016, a number of BWI representatives consisting of its affiliates from the United Kingdom and Finland, travelled to Doha to undertake the first of several joint inspections planned for 2017. The agreement is initially in effect for one year.

The visit began on Wednesday, 1 February at Al Wakrah Stadium. As agreed, BWI were provided access to the site to inspect OHS practices on-site and speak to workers about their conditions and treatment on the project. The visit continued on Thursday, 2 February when BWI inspectors were provided access to living accommodation facilities and spoke to workers about their situations and experiences.

Kyösti Suokas, Vice-President of Rakennusliitto, stated: “We are pleased that the inspections have begun so soon after the effective date of the agreement on 1 January 2017. Our delegation was encouraged by the openness of the process to participate in the joint inspections, where we had the opportunity to speak with workers about their working and living conditions.”

He added: “Upon the conclusion of each day, we also welcomed having the opportunity to provide our initial observations and suggestions to the contractors. We will work with the SC through the Joint Working Group to follow-up on the recommendations and corrective measures made by the companies engaged on the stadium project.”

The MoU includes joint inspections of construction sites and workers’ accommodation. It also includes health and safety training for the SC and its contractors working on World Cup projects and a review and assessment of the SC’s current Workers’ Welfare Forums – a mechanism developed to deal with worker grievances.

The joint inspections followed the death of Zac Cox at Khalifa International Stadium last month. The trip to Doha gave the BWI delegation the opportunity to discuss the fatality and subsequent investigation. Furthermore, since the Al Wakrah stadium was the site of the death of Mr. Anil Kuman Pasman last October, the BWI delegation were also able to review the corrective measures that have now been put into place to prevent similar incidents.

SC Secretary General H.E. Hassan Al Thawadi considers the first joint inspections with BWI to be a significant milestone for the SC and the organisation’s workers’ welfare journey.

He said: “This agreement with BWI highlights our commitment to ensuring the highest levels of workers’ welfare standards and compliance across all of our sites. We have always been open, transparent, and committed to working together with well-respected international partners who share our vision of achieving sustainable change in this area.”

“The initial feedback from BWI has been constructive and demonstrates the value of entering into this agreement. The Joint Working Group will now study the outcomes of these inspections and a report will be published in due course.”