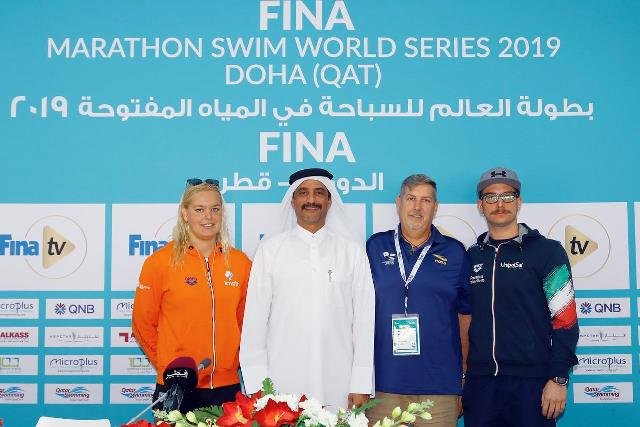 Qatar Swimming Association (QSA) has finalized all arrangements and is ready to host the FINA Marathon Swim World Series Doha (QAT) 2019. A total of 136 swimmers including 84 male and 52 female athletes from 24 countries are taking part in this spectacular event. It was announced at a press conference held today. It was announced that the world’s best long-distance swimmers will compete over the 10km course on February 16 starting at 0900 AM (Women) and me at 0100 PM. The races will take place from Oryx Statue, Doha Corniche.  Press Conference was adressed by Khaleel Al Jabir, President Qatar Swimming Association and FINA Bureau Member,   John Wes, FINA Technical Delegate, Olympic Gold Medalist Sharon Van Rouwendaal (NED) and Simone Ruffini (ITA).

A total of 338 swimmers have signed up for different categories available in the event, which is open to the public.

Qatar has hosted multiple top-level FINA events, including seven FINA Swimming World Cups and the 2014 World Swimming Championships. The FINA Marathon Swim World Series, which Doha hosted for the first time in 2018, is adding a valuable experience and expertise as QSA builds up to the Doha 2023 FINA World Championships.

“I would like to welcome all the swimmers for the FINA Marathon, we are holding the event for the second time and I am happy the number has increased from the last time. We are ready to host these world’s best swimmers,” said Khaleel Al Jabir.

“Qatar will host this FINA Marathon till 2021 and it is very good for us as everybody knows Qatar will host the World Championships in 2023, where this competition is one of the events. We are getting a lot of experience by hosting this competition, as we prepare for the World Championships, in which more than 15,000 athletes will take part in Doha,” he added.

John West said: “Over the past couple of days, we have been reviewing all the arrangements for the competition, and we are very pleased with the level of organization and cooperation we are receiving. We would like to thank QSA for hosting the opening meet of the FINA Marathon Swim World Series 2019.”

“We give a report on every event. Those reports identify how the competition ran and also if there is room for improvement. Every year we try to make improvements just to make the event better. I think I am very happy about all of the details that we are receiving,” he added.

“We have a very strong field. We have good conditions so we are looking forward to a very good race.” John West added: “Many countries are using this event for the selection of World Championships so this is a very very important event.”

Van Rouwendaal, who won in Doha last year, said she was prepared for the challenging race.

“Conditions are looking very good. I like the water temperature, I like 20 degrees. The course is excellent again like last year and it’s always good to be back in Doha,” said Van Rouwendaal.

“Last year, I ended up winning it though my preparations were not good. This year, I feel strong but the other girls are also strong. The field will be strong and tough so I will try my best,” she added.

“I had problems before but now I am strong for the race and I will try my best because this race is important for the World Championships,” said Ruffini.

Doha meet will be followed by 8 more stops in different cities in the world.

The day prior to the FINA Marathon, Qatari residents will participate in the Corniche waters, swimming the same course at the Doha Open Water Challenge on February 15.