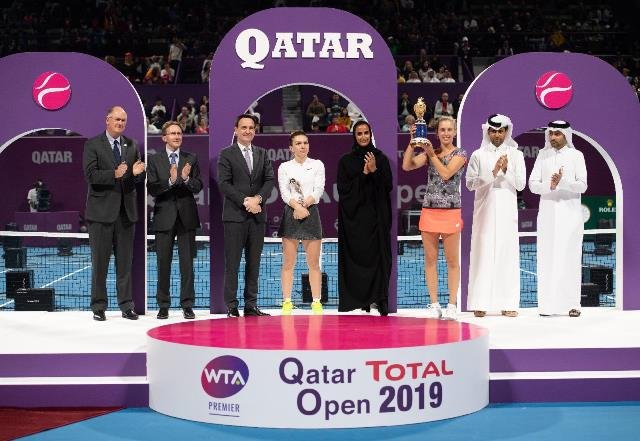 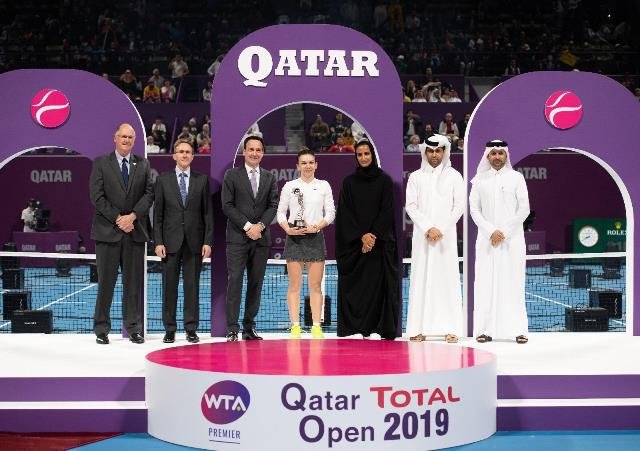 Something about this week felt predestined for Elise Mertens. Throughout the city she saw herself emblazoned on banners and posters, the word VICTORY written across her shoulders.

“I saw that the first day already,” she said at the Qatar Total Open on Saturday. “I was like, ‘Oh, I really have to win this first round!’”

The Belgian went four better than that, earning three Top 10 wins in a row – capping it off with a remarkable comeback against top seed Simona Halep – to score the biggest title of her career.“I was really happy the way I played this week, actually. I’m happy about the process that I made, starting out playing less well and then getting better every match.

“This is why you do it, to beat those top 10 players and getting the victory at the end.”

Down a set and a break to the reigning Roland Garros champion, Mertens summoned her best tennis to tire out her in-form opposition, spurred on by advice coach David Taylor gave during the match.

“He said to stay positive, stay in the game, that I deserve to be here in the final after this week, and he said that I’m playing well this week. “He kept on cheering for me, even though I was losing, but playing the right way.”

Though she stunned Elina Svitolina to reach her first Grand Slam semifinal 13 months ago at the Australian Open, Mertens views this latest effort as an even bigger success, citing her wins over Kiki Bertens and Angelique Kerber as a sign of improved consistency.

“It’s a big moment for me, getting this victory. Of course playing in a Grand Slam and getting the semis is really a great achievement, but I wanted a step further to getting this trophy.

“Playing against those Top 10 players, which I back to back did this week, and especially also with the tennis I played, I think this one would be the nicest victory.

“Consistency is one of the key things to be a top player. I think Kiki Bertens already did a good job showing that last year and this year. That was a really tough match for me, but I think they were all good matches, all a part of process that I made this week.”

Speaking of predestined, it was runner-up Halep who pulled off the same hat trick of Top 10 wins to capture the Doha crown in 2014; she reached her first Grand Slam final in Paris a mere four months later.

Might this be a similar springboard for the rising Belgian?

“I hope so. I had a pretty good run last year throughout the whole year, so I hope so. I’m really working hard. “You have to keep working and both feet on the ground every week.”