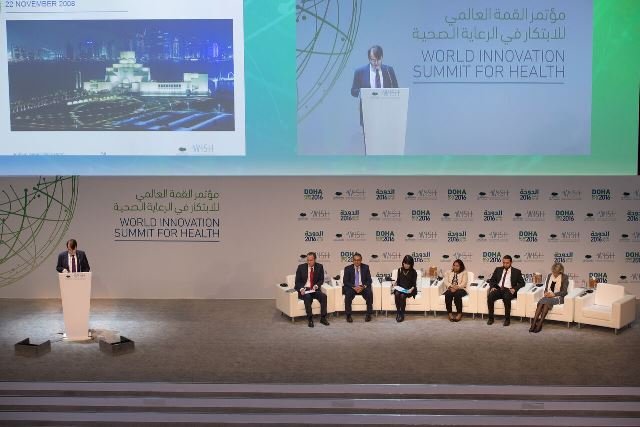 The importance of collaborating to find cross-border solutions to global healthcare issues took centre stage at the second day of the World Innovation Summit for Health (WISH) today at the Qatar National Convention Centre (QNCC).

Renowned economist Larry Summers, former US Secretary of the Treasury, used his keynote address to call for an increase in funding to tackle transnational healthcare challenges, such as developing medicines and vaccines for diseases of poverty, increasing pandemic preparedness, and rethinking priorities in healthcare policy-making. Currently, he said, only 20 percent of donor support for health goes toward such global efforts.

“If a country invests in better health clinics, its citizens capture all the benefits of the investment. If it invests in pandemic preparation or vaccine research or development of new service delivery techniques, the benefits flow around the world. So, it stands to reason that without global cooperation, the world will underinvest in global public goods and global functions,” he said.

Summers argued that boosting donor support for global healthcare efforts to 50 percent by 2030 could save millions from death by pandemic, smoking-related illnesses, obesity and other diseases. At the same time, he said, developing economies will be better able to address their domestic healthcare needs as their individual economies grow.

Summers concluded: “This is a conscious choice. There’s the moral point that I feel deeply as an economist, precisely because health is so important that it’s essential rigor be brought to investment choices. There’s a practical point as well. I found that as Treasury Secretary I had far more time for those who did not just seek more resources for new priorities but were willing to contemplate ways of making do with less over time for existing priorities, than for those who just wanted more. And it’s essential those fighting for global investment be heard. Tens of millions of lives are at stake.”

The afternoon’s keynote speaker, Mustafa Suleyman, co-founder of DeepMind, reminded delegates that a vast array of technological advancements exist to enhance healthcare, saying: “We looked at many different application areas, but none seemed to struggle more with technology than healthcare, none seemed to have a margin of improvement that was as striking as the opportunities that we see in healthcare. I think digitization is absolutely critical when it comes to delivering safe and high-quality care.”

The 2016 WISH event was the largest since the initiative was launched in 2013, with more than 1,400 delegates from more than 100 countries attending. Among those in attendance were nearly 40 ministry-level representatives.

Professor Lord Ara Darzi, Executive Chair of WISH said “This has been a fantastic Summit and the best WISH yet. We’ve had the world’s top experts and leading edge innovators sharing their solutions to the most stubborn health problems. I’m delighted that the Summit has been such a success. Our global community of innovators leave Doha informed, inspired and energized by this landmark Summit. We return to more than 100 countries with new friendships and connections that will endure.”

A pair of policy briefings kicked off the day, with healthcare providers and policymakers discussing Dementia and Delivering Affordable Cancer Care. In the former, the speakers discussed a condition that has been increasing with alarming speed around the world.

Shekhar Saxena, Director of the World Health Organization’s Department of Mental Health and Substance Abuse, said: “Dementia is a silent epidemic. More cases of dementia are recorded every day, month and year. Unfortunately, we are still not paying as much attention to this topic as we should be. The global population is ageing, we are living longer and this is one of the leading causes of dementia. The figures for global incidence and prevalence of dementia are very clear, they are there for everyone to see. One dementia case is recorded every 4 seconds, and these numbers keep increasing, with 9.9 million new cases recorded worldwide each year.”

Later, conversation centred around how to form cancer care policies that are economically efficient and address patients’ true needs, including palliative care and medication. “Since 1990, the price of cancer medication has increased 10-12 percent per annum. Cancer medicines are some of the most expensive resources on the planet, and we’re in desperate need for effective cancer drugs that governments can afford,” said panellist Richard Sullivan, Director of the Institute of Cancer Policy at King’s College London.

Egbert Schillings, Chief Executive Officer of WISH, said: “The story of WISH 2016 is not told in the number of participants or even in the pages of research, it is told in the moments of impact that we created because we were in one room together. Projects coming out of this year’s Summit will change people’s lives here and everywhere for the better.”