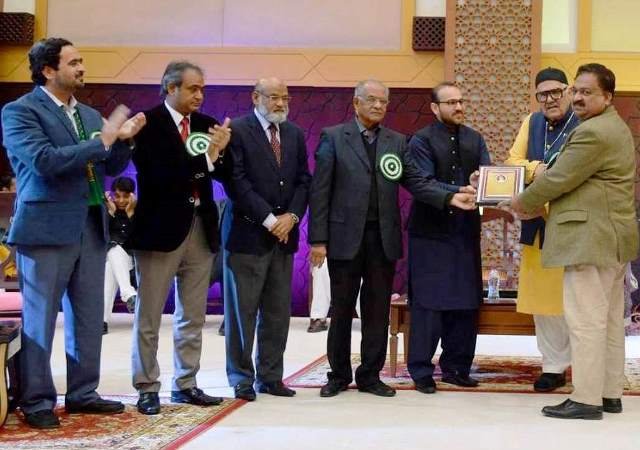 Doha based URDU language literary forum of Pakistani expatriate community ‘Shaeqee Ne Fun’ headed by URDU World’s renowned personality Mohammad Atiq, recently launched ‘Malik Museeb-ur-Rehman International Award’ from Qatar on URDU literary works. The award is dedicated in memory of founder of the forum Late Malik Museeb-U-Rahman in recognition of his services for the promotion of art, culture, Urdu poetry and literature from Qatar. Malik Museeb-U-Rahman was also founder of ‘Majlis-e-Frogh-e-Urdu Adab’, a Doha based World’s prestigious forum on Urdu Literature established in 1982.

Mohammad Atiq, Chairman of ‘Shaeqee Ne Fun’ and he also chairs ‘Majlis-e-Frogh-e-Urdu Adab’ said in his address at the Award presenting ceremony that ‘it is a matter of great importance and pleasure that we have decided to confer ” Malik Museeb-ur-Rehman International Awards” . However, in the presence of annual ‘Aalmi Frogh-e-Urdu Adab Awards’ under the banner of ”Majlis-e-Frogh-e-Urdu Adab ”, it was decided to give this Award under the banner of ‘Shaeqee Ne Fun’ Doha, to three poets on their best poetry collections in the following three categories :

It is to recall that Doha based URDU language promoting society ‘Majlis-e-Frogh-e-Urdu Adab’ is awarding two top literary personalities every year, one from Pakistan and one from India on their literary works. In this regard, there are two juries which decides in their respective country.

Fartash Syed, Chief Organisor of the forum elaborating further on the selection criteria of the winners in his speech on the occasion told that a Jury headed by reputed critic Prof. Qazi Abid along with senior academics from Universities of Pakistani four provinces as members decided the names of winners of 2017 First Annual Award.

An Aalmi Mushaira (Int’l Poetry Session) was organised by ‘Shaeqeen-e-Fun’ to celebrate Pakistan National Day and designate it in memory of the renowned Urdu poet and scholar ‘Jamiluddin Aali’, who died in Karachi over a year ago and confer ‘Malik Museeb ur Rehman International Awards’. Colourful and long years to remember event was recently held in Al-Banush Club, Messaied, Qatar. “A continuation by forum’s tradition of celebrating in diversity” as said by Mohammad Atiq, Forum Chairman about the occasion. Urdu poetry lovers whole heartedly lauded and praised on their liking poetry verses and the

The event was spread on two days long program. The first function was held in The Next Generation [ TNG ] School, AlWakra presided by Raju Jamil Aali and compered by Fartash Syed. This function was in two parts. The first part comprised of the citation ceremony of ” Malik Museeb-ur-Rehman International Award Winners” while the second part comprised of describing Jamiluddin Aali’s personality and on his literary services.

Abbas Tabish on receiving his Award thanked the organisors and specially to the members of jury on his nomination. He recalled his memories and said that Malik Museeb ur Rehman had invited him to participate in ‘Jashn-e-Sipas’ mushaira held in honour of Salim Jafri in Dubai in 1996. Then, our mutual relations of love and respect developed.

In the second part of the function, Fartash Syed and Raju Jamil Aali gave a brief on Jamiluddin Aali’s personality and literary career. A documentary on late poet works ‘Khawab ka Safar” was also shown which was liked by the audience with great interest.

Mohammad Sarfaraz Khanzada, former ambassador of Pakistan in his speech in capacity as the Chief Guest on the occasion congratulated Management Committee members and the award winners. He highly praised and thanked Raju Jamil Aali for bringing Aali ji’s documentary ‘Khawab ka Safar’. Khanzada also mentioned about some aspects of Aali ji’s life.

Next day, the second event was held in Al-Banush Club, Messaied compered by Furqan Paracha and Fartash Syed. It had two parts, first presentation of Awards and then Mushaira. Mohammad Atiq, the Chairman of the forum in his welcome address congratulated all the Pakistanis present in the hall on the 77th Pakistan Day celebrations. He said ‘ Today is a very important day for us in many ways. One, we are going to present ‘Malik Museeb ur Rehman International Awards’ to 3 nominated poets. Second, we are going to hold Aalmi Mushaira in memory of Jamiluddin Aali, under the banner of Shaeqee Ne Fun, Doha’. He congratulated Abbas Tabish, well renowned poet upon his nomination for the first Malik Museeb ur Rehman International Award. He paid his gratitude to Jury Chairman, Professor Dr. Qazi Abid and the members of jury for their time and selecting today’s award winners.

Mohammad Atiq thanked Pakistan embassy Doha on its continuous support to the forum, Mohammad Sarfaraz Khanzada, Raju Jamil Ali and the large number of the spectators on their presence and making the event ‘one of the most memorable for coming long years’.

A special thank was voted for QAFCO management and Al-Banush Club management for facilitating the forum to hold their function. He lauded his organising team members on their efforts and the fine arrangements for holding the event.

Hafiz Junaid in his address congratulated all Pakistanis present on 77th Pakistan Day. He said that it was necessary to hold such functions as they promote Pakistani art, culture and literature and ultimately Pakistan’s official and national language, Urdu. He added that Aali Ji was a walking Pakistan. His patriotic national songs, generation by generation, are giving patriotic training to all of us. He further said that Malik Museeb ur Rehman’s name has developed into a form of an Urdu movement.

He congratulated ‘Shaeqee Ne Fun’ headed by Mohammad Atiq and his management committee on launching the new award.

Int’l Urdu Poetry session was conducted by well known poet and compere Fartash Syed which is a guarantee of event to success.