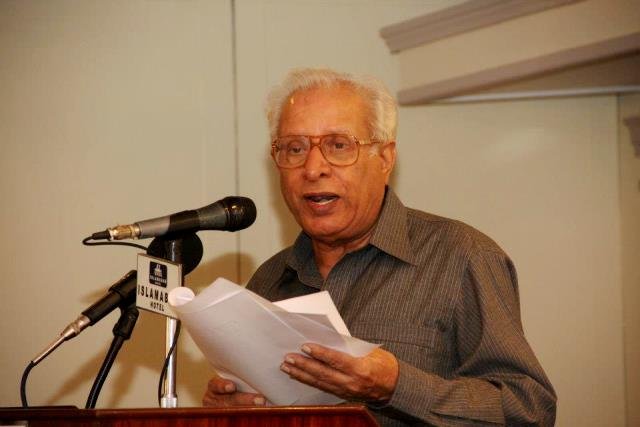 Prof. Fateh Muhammad Malik, one of the most prominent literary critics, intellectuals and scholars of Pakistan, has been declared the winner of 21st Aalmi Frogh-e-Urdu Adab Award from Pakistan”, it was announced today by Mohammad Atiq, Chairman of the Board of Patrons, Majlis-e-Frogh-e-Urdu Adab’s (Society For the development of Urdu literature).

Daud Ahmed Malik was the Co-ordinator.

Prof. Fateh Muhammad Malik will receive the honour along with Dr. Abdus Samad, who was already declared winner of 21st Majlis Award from India by the Indian Jury headed by Dr. Gopi Chand Narang.

The Award function followed by a grand Mushaira will be held in Doha in October this year.

The Award carries a cash prize of Rs. 150,000/= and a gold medal for each winner. The Award is given every year since 1996, to two literary personalities, one from Pakistan and the other from India, for their contribution to the promotion of Urdu language and literature- as a life-time achievement award.

Mohammad Atiq said ‘Prof. Malik’s gentle smile and unassuming demeanor does not reveal the long list of awards and honours , he has accumulated over a forty four years long career. He is highly respected in Pakistan, India and abroad’.

A brief profile of nominated award winner from Pakistan

Prof. Malik was born on 18th June, 1936 in a small village Tehi, near Talagang (now in Chakwal district near Islamabad) where he spent his childhood playing in the streets and running around mustard fields. The son of a school teacher, he grew up in a household that was passionate about learning. Thus it is no surprise that he ended up with an equally strong devotion to education and research.

He claimed that it was in this small village as a child that he learnt to look beyond the horizon, a habit that helped him acquire a broad vision.

He served as lecturer in Urdu in Government College, Rawalpindi.During 1961-1972

In 1975, he was a Senior Research Fellow, Languages and Literature, School of International Affairs, Columbia University, New York.

From 1975-1984, he served as Chairman, Department of Pakistan Studies, Quaid-e-Azam University, Islamabad.

During 1984-1988, he was Professor on visionary & revolutionist poet Iqbal at Iqbal Chair, Heidelberg University, Germany.

During 1992-1998, he was Director, National Institute of Pakistan Studies, Quaid-e-Azam University, Islamabad.

During October 1999-to December 2000, he was the Chairman, Department of Pakistan Studies, Allama Iqbal Open University, Islamabad.

From December, 2000 -August 2008, he was the Chairman, National Language Authority, Cabinet Division, Islamabad.

August 2008 to February 2009, he was Dean, Faculty of Languages, Literature and Humanities, International Islamic University, Islamabad.

He has authored a number of books. His notable works include 1)Iqbal inspired Humour ; A note on Parodies by selected Urdu poets, published in Of Clowns and Gods, Brahmans and Babus – Humour in South Asian Literatures.

2) ‘Iqbal’s reconstruction of Muslim political thought, published by University of Leicester, England in 2000,

Besides the above books, Prof. Malik has authored a number of research articles, edited books, contributed chapters to many books, participated in workshops, seminars and conferences in Germany, U.K., USA, Mauritius, Iran, Belgium and France. Moreover, he was responsible for supervision of a number of Ph.D’s. and M. Phil. student scholars in Quiad-e-Azam University, Islamabad during the last 20 years.

In addition, a number of student scholars have done research on his contribution to Urdu literature in Public Sector Universities during the last 15 years. He is a member of the Board of Governors and Academic Councils of many Universities and institutions in Lahore and Islamabad.

He is also a member of a number of Editorial Advisory Bodies of Research Journals in Lahore, Islamabad, Jamshoro, Khairpur and Multan.

In recognition of his services in the field of criticism, research and literature, following awards have been bestowed upon Malik :