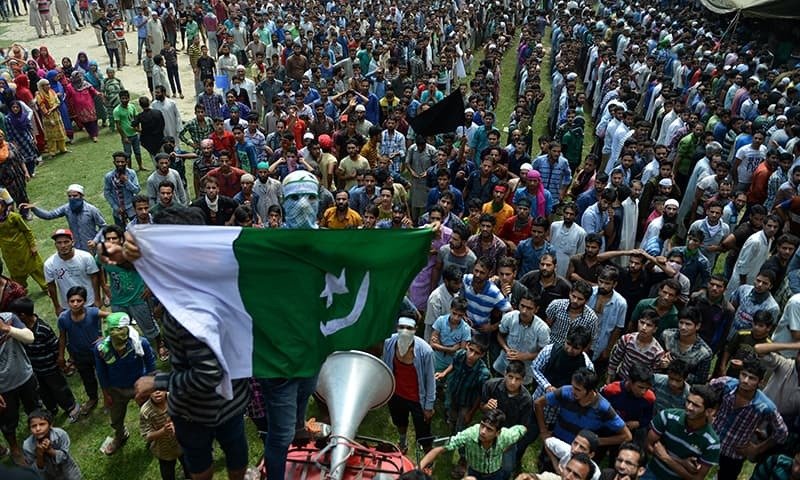 Taking part in the general debate on Human Rights in the 35th Session of the Human Rights Council on Thursday (Agenda Item 4), Pakistan said the grave situation of gross and systemic violations of human rights and denial of fundamental freedoms in Indian occupied Jammu and Kashmir required council’s urgent attention.

Pakistan maintained that the Indian government has broken its own record of brutality in occupied Jammu and Kashmir, not only in target killing but also by indiscriminately killing over 100 young unarmed Kashmiri protesters.

The Indian forces have blinded hundreds of Kashmiris, including children, and injured over 16,000 protesters with live ammunition, pellet guns and gas shells.

The world witnessed its first “mass blinding” in Kashmir, which compelled the New York Times to label the year 2016 as a “Year of dead eyes” in Kashmir.

The continuing Indian brutalities and unprecedented violence by Indian occupation forces in occupied Jammu and Kashmir since July 2016 are crimes against humanity. Indian barbarities are a cause of deep anguish and pain for the Kashmiris and a slur on respect for human rights globally, Pakistan deplored.

India has banned the social, electronic and print media to prevent reports of brutalities against Kashmiris from reaching the outside world. Despite this media blackout, the atrocities being committed in IoK are being reported in Indian and international media, Pakistan said.

These brutalities are also being increasingly criticized in many parliaments around the world. Political analysts and members of civil society from across the globe have concluded that the large scale uprising, which is going on in IoK, involving mostly young unarmed Kashmiris confronting fully armed Indian occupation forces, clearly shows that Kashmir is a burning issue requiring urgent International attention, Pakistan emphasized.

In their desperation to hide the reality of the indigenous uprising of young Kashmiris, including by tens of thousands of girls and boys, India is trying to equate it with terrorism, Pakistan argued. The facts have repeatedly come out proving that indigenous Kashmiris were killed by Indian occupation forces in ‘fake encounters’ and ‘buried’. Nobody believes that thousands of young boys and girls, who have been agitating ceaselessly since July, 2016 are terrorists, Pakistan said.

The people of Indian occupied Jammu and Kashmir are losing faith in Indian democracy since in the recent sham by-election in Srinagar on April 9, 2017. The abysmally low voter turnout of 7% collapsing to 2% during re-polling is the lowest in 30 years.

“Despite Indian state terrorism and repression the steadfast resolve displayed by the Kashmiris sends a clear message to India. How many more Kashmiris would India kill so mercilessly? If India thinks that by killing more and more Kashmiri youth India would suppress the Kashmiris movement for their right of self determination, it has not learnt any lessons from history,” Pakistan pointed out.

Pakistan explained that it was making this right of reply in response to the Right of Reply made by India.
“We are amazed at the Indian delegation’s persistence of fudging the facts and telling outright lies. It is perplexing whether they understand the meaning of the words “State-sponsored terrorism” or they follow a very different definition than the rest of the planet.”

Pakistan said, “State sponsored terrorism is when your neo-fascist government believes in Hindutva and follows a state policy of persecution of minorities including Christians, Dalits and Muslims; When you have blood at your hands of around hundred thousand innocent Kashmiris;

When you have raped more than 8,000 women and blinded more than 250 youth including girls and children; When you attack ambulances and have impeded access to medical care to the injured;

When you use a third country to wage terror wars in another country;

When you do cease fire violations at the Line of Control causing deaths of innocent villagers;

When you send your in service RAW agents to run terror networks and fuel sectarianism in other sovereign states;

When you use draconian laws such as Armed Forces Special Powers Act and Public Safety Act to give blanket impunity to perpetrators of torture and extra judicial killings; And finally

when you celebrate and decorate those who commit heinous crimes against human dignity such as tying an innocent person in front of jeep to be used as human shield.”

Pakistan has been at the forefront of global fight against terror and its efforts and sacrifices have been universally accepted and recognized. “We have sacrificed more than 65,000 innocent souls in this fight. Our
success against the terrorists’ networks would definitely not go well with India considering that they had put in years of effort in creating those terror networks by actively engaging in state sponsored terrorism. But our resolve, conviction and policy of zero tolerance against terrorism has triumphed,” Pakistan maintained.

The fact finding report of 25 Citizens Group, Pakistan highlighted, has clearly concluded that the actions of the Indian state in the Kashmir valley are far removed from the values of a democratic republic.

Pakistan always stood up for the oppressed and suppressed people of the world. It’s time that we, the United Nations should join our voices to stop the Indian persecution of innocent Kashmiris who are paying the price for freedom with their blood. Basic rights and fundamental freedoms of innocent Kashmiris are being ruthlessly violated with impunity everyday, it added.

Concluding the debate Pakistan quoted Martin Luther King Junior’s saying who too had suffered indignities, “The ultimate tragedy is not the repression by bad people but the silence over it by good people.”

Doha, 25 June 2022 THE Embassy of Nepal and the Non-Resident ...
END_OF_DOCUMENT_TOKEN_TO_BE_REPLACED