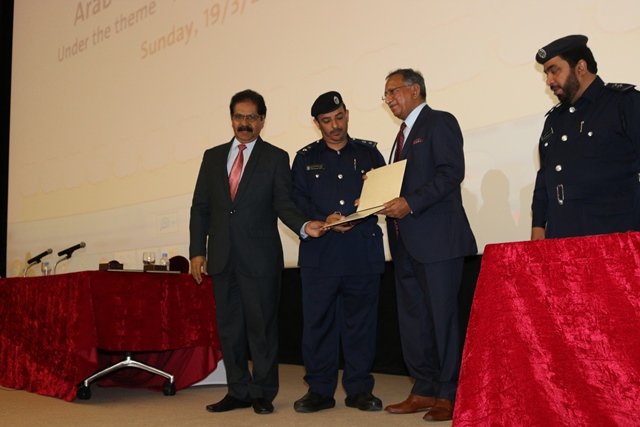 ‘This event comes so significant for several considerations because of the close relationship between the idea of peaceful coexistence and social security and its positive reflections on maintaining public order and ensuring peace of mind’, Lt. Col. Saad Salim Al Dousari, Asst. Director of Human Rights Department, Ministry of Interior said in his address on the occasion of celebrations of Arab Human Rights Day held at the Civil Defense Head Quarters, Doha. He said ‘ this achievement has placed Qatar as a model of cultural coexistence and social peace, and respect for others regardless of our differences in the race, religion or language.’

Lt. Col. Al Dousari said that ‘It is remarkable that the State of Qatar has been ranked in the foremost places for the eighth consecutive year in the Global peace index (first in MENA region and 34 at global level) that underscores the success of Qatar in achieving the peaceful coexistence and social security.’

The Human Rights Department at the Ministry of Interior celebrated today ‘Arab Human Rights Day’ commemorating 16th of March every year.This year theme of the celebrations is Human Rights and Peaceful Coexistence. Present on the occasion were a number of officials from different departments of MoI and representatives of Arab and Non-Arab expatriates in Qatar.

Lt. Col. AlDousari said ‘Several aspects have contributed to realize the idea of peaceful coexistence in the State through its care for the preservation of cultural diversity, and response to the needs of expatriate residents from different cultural affiliations, and cultures, ethnic and religious groups.’. He said that ‘The outreach activities with Arab and expat communities to achieve the idea of community partnership in the maintenance of security, and respecting the system of national values, while respecting the freedom of others in his religion and belief, intensive activities organized by the Department of Community Police in collaboration with communities to raise awareness on safety and security, preservation of human rights have played significant role in spreading the message of peaceful coexistence among the communities in Qatar.’

He underscored the contribution of the State of Qatar in the support of joint Arab action in all fields, particularly in the area of human rights, highlighting the role of the Ministry of Interior in this regard, through participation in conferences of Arab police and security leaders and conferences of the leaders of the Arab interior ministers who are responsible for the human rights.

Magdi Ismail from Egypt represented Non-Qatari Arab nationals while Binish Tamang of Nepalese Community represented Asian communities lauded the efforts of the concerned authorities in the country to protect human rights of all community members and maintain peace and security in the State.