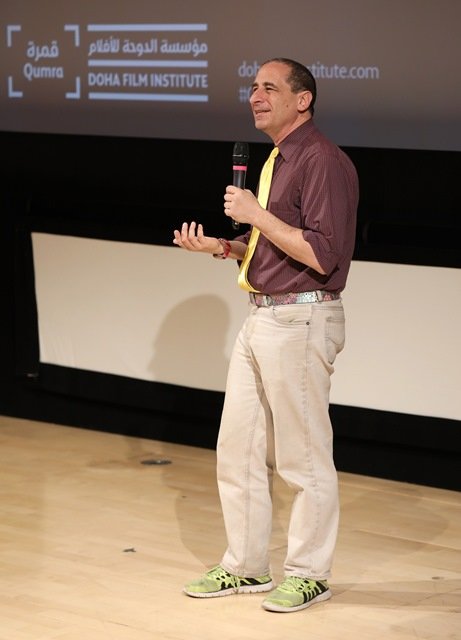 Mike Reiss, winner of four Emmy Awards and famed for writing ‘The Simpsons’ for three decades, took the audience through his illustrious career at a packed auditorium in the Museum of Islamic Art, as part of this week’s Qumra Talks

The session, On writing and Producing with Mike Reiss, saw Reiss describe the lessons that he has learnt along the way, demonstrating how all these skills came together in The Simpsons, the internationally-renowned animated comedy.

The self-deprecating writer immediately enamoured the audience to him by stating, “Please remember, I’m a comedy writer not a comedian.”

However, the talk itself was full of great humour bringing his points about writing comedy to home by playing some of his favourite scenes from The Simpsons.

Imparting advice to attendees who are starting out in their career, Reiss said: “In this job you have to make your own luck, and work on as many ideas and projects as you can. When I started working with The National Lampoon, I had five other projects on the go.”

Reinforcing the advice, Reiss also suggested writers and filmmakers should take any job that comes their way as you never know what it will turn into. Reiss was offered the role of writer of The Simpsons, a new show in 1988, on TV network Fox Broadcasting Company, which was also a newcomer to audiences. He took gamble and here he is three decades later sharing his story in Qatar – and many other parts of the world.

Rounding up the lively event, which was attended by students, upcoming writers and vloggers, Reiss said: “You can’t teach comedy. Or how to craft it. It just comes from observation. You have to watch a lot of good comedy. Watching good work inspires you to do good work.”

The session touched upon topics such as character development, ‘What makes a good joke?’, and the writing process of The Simpsons. It was the second in the series of Qumra Talks organised as part of Qumra, the industry event by the Doha Film Institute, in partnership with the Northwestern University in Qatar.

Qumra Talks features three specially curated discussions, open to the public. It brings together leaders from the film, TV, technology and online worlds to offer new perspectives into areas that are redefining the film and media ecosystem.