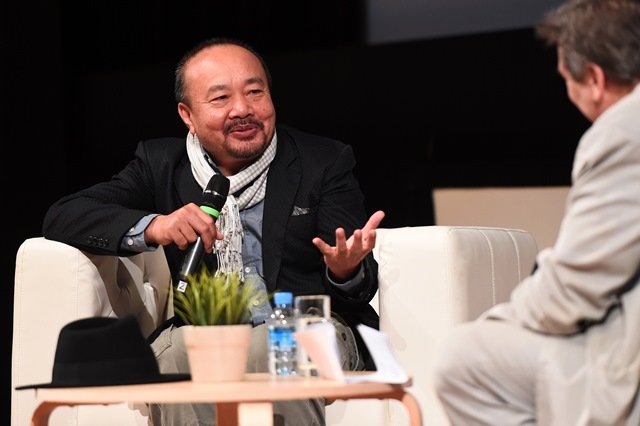 “This place has changed a lot in the past 20 years. It is going very fast. But if you do not document your story (your past and heritage), you will have no history,” he told audiences, taking them on a sublime journey into his own tryst with film making, Rithy Panh, Cambodian-French filmmaker and Qumra Master was addressing emerging film makers in Qatar.

Panh, the director of The Missing Picture (Cambodia, France/2013), nominated for the Academy Award for Best Foreign Film, is acclaimed for his compelling documentaries that probe into the dark annals of Cambodia’s history under the Khmer Rouge.

Making film is not easy, Panh told the young filmmakers. “You do not have to sacrifice life for films; life is more precious. But if you ask too many questions (on how and what to film) you will be paralyzed. Just go do it, and do it well.”

Panh took audiences through his early days in France, when he received a camera as a gift and shot his first ‘film,’. “it made people laugh and I realized it was a powerful tool,” he told that he learnt the art of cinema, as much by attending film school, as by watching countless films.

“I don’t ask my students to make films of the genocide,” says Panh. “We train them and give possibility to making images and sounds.” This is part of his mission to document his nation, which he says is relevant to the region too “because documenting memory is important. So use the digital tools to express your feelings and sensitivity.”

Rithy Panh has opened the Bophana Centre in Phnom Penh to help rebuild the Cambodian film industry. It had a number of young Cambodians working in First They Killed My Father, Angelina Jolie’s recent film adaptation of Loung Ung’s memoir, with Bophana Productions as co-producer.

At once personal and yet detached, his works including The Rice People (1994), S21: The Khmer Rouge Death Machine (2004) and Duch, Master of the Forges of Hell (2012), set the framework for the Qumra Masterclass led by Richard Peña, former programme director of the Film Society of Lincoln Center and the director of the New York Film Festival.

For Panh, each film has been intense excursions into his own life and soul. But for a filmmaker who sought catharsis in documenting the evil that men did, he believes that ‘cinema cannot heal anything. Cinema cannot change life or the world but it gives you the possibility that you can change something. That is why cinema is relevant.”

His approach is to filming is not to pan the camera on the subjects “but to be with them.” That is why in making S21, which has one of the powerful single-shot sequences of a ‘perpetuator’ describing his deeds inside the prison, Panh refuses to take his camera into the cell.

“My camera stops at the door; if I enter it would be to step on the bodies of the prisoners who were there.” Five falcons appeared out of nowhere during the shoot, an enigma, he says is often part of honest documentary making.

Documentary is difficult than feature; there are a lot of forbidden things, and moral and ethical considerations, he adds. “But for me, documentary is important because it is a way to show people that you cannot destroy me. I am here, and I am capable of making poetry, and creating more than fiction.”

He went to Mali, worked with Souleymane Cissé, was arrested for filming, and the experience gave him “hope that cinema is not just entertainment but also memory, dignity, love, poetry and point of view.”

His first film The Rice People was a tribute to his grandparents, which is underlined by his intense spiritualty that “everything has a soul; the house, the kitchen.”

He also learnt during its making that in directing children it is best left to ‘express feelings by themselves,’ and which formed the foundation of his cinematic philosophy – ‘you do not make film of people but with people.”

And from his own experiences – through life and cinema, he has learnt that there is nothing called the ‘banality of evil. There is only the choice you make – in anything.”