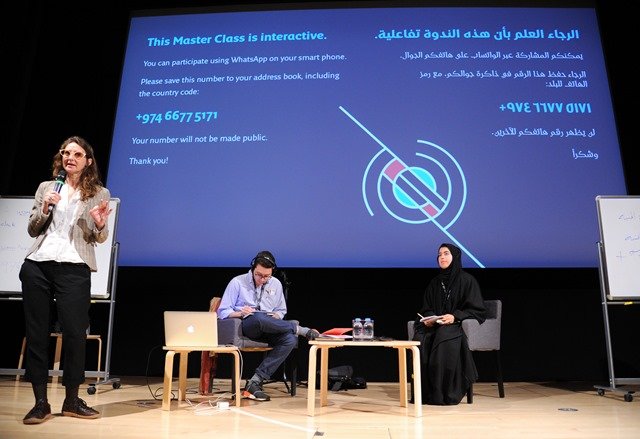 Concluding the Qumra 2017 Master Class, award-winning film director and screenwriter Lucrecia Martel guided emerging filmmakers to understand the intrinsic common denominators that shape our perceptions of reality ­– and to challenge these to present new ways of thinking.

Martel’s interactive and thought-provoking class was highlighted by simple exercises using drawing, language and film to demonstrate that, although humanity is different in many ways through nationality, culture or social backgrounds, it shares the same commonalities of reality.

These common realities are cinematic limitations, said Martel, as they bind us to present information in certain ways, “restricting our boundaries just like a jail cell.” However, “there are tools to open the doors to these jail cells – cinema is one of these tools.”

Martel discussed the notion of, “faults where we realise reality is not as it seems.” This was demonstrated by a home-made video taken in the Qatari desert overlooking Richard Serra’s iconic “East-West/West-East” steel structures.

Warping the audiences’ interpretation of the film, she turned the image upside down so the short film presented a new reality. “The blue sky is now the sea, the desert landscape a beach; by introducing new sounds of waves and yacht engines, a new motion is also created where viewers are travelling in the opposite direction,” creating a completely new perspective of reality.

Martel expanded on the importance of audio in film by noting viewers can close their eyes to stop watching, but sound continues to depict the cinematic experience, which can create a deeper interaction for the audience.
”Sound is the only thing to physically impact spectators from a tactile point of view in a film, despite the fact sound isn’t perceived as tactile,” she continued, it’s what leads us into the core characteristics of 3D cinema.

This is evident in Martel’s first feature film, La Ciénaga (Argentina, France, Spain, Japan/ 2001). Filmed in a modern, neo-realist style, it simmers with claustrophobic dread, using ominous natural foreground sound to portray the horror of a family. The film was screened at Qumra 2017 as part of the Modern Masters Screening.

Collating her abstract thoughts on reality, Martel urged young filmmakers to push themselves out of their comfort zones and to create these ‘faults’ to expand reality. To challenge preconceived ideas of reality, “it is not where to put the camera and spotlights, it’s finding ways of seeing beyond the structured and organised reality.”

Closing the talk, Martel said filmmakers “have a great privilege, as people share their secrets and dreams for us to visualize into film. It is our role as cinematic storytellers to transform and share new ideas with the world.”