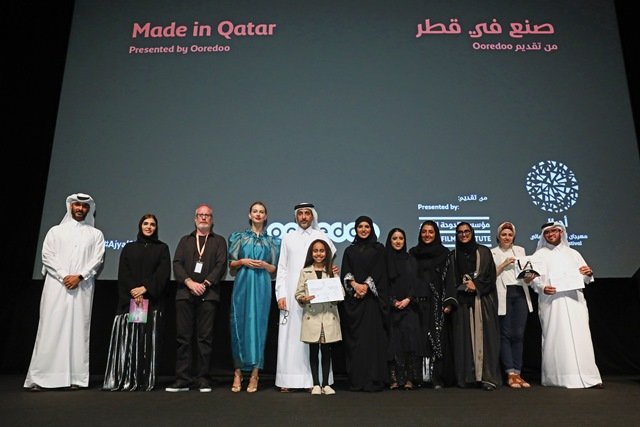 The inaugural ‘Abdulaziz Jassim Award for Best Performance’, instituted this year in honour of the late legendary Qatari actor, was given out by Salah bin Ghanem al-Ali, Minister of Culture and Sports and DFI Board Member, to Fatima Al Nahdi, for her role in Gubgub. The film, directed by Nouf Al Sulaiti, follows the story of an adventurous girl who goes crab-hunting with her family.

Sh’hab, an endearing tale of a young girl’s curiosity sparked by the myth of falling stars, directed by Amal Al-Muftah, and Just Another Memory, a powerful documentary on what it feels like to be displaced by war, directed by Mariam Al-Dhubhani, have won the Best Narrative and Best Documentary honours, respectively.

Directed by Mohamed Al Mahmeed, Nasser Goes to Space, the story of a highly creative 7-year-old boy who copes with his parents’ divorce by escaping to a magical space he creates in his mind, won the Jury’s Special Mention.

Made in Qatar presented by Ooredoo is one of the flagship programmes of the Ajyal Film Festival, the annual cinema event hosted by the Doha Film Institute at Katara Cultural Village. Celebrating home-grown talent and featuring works by Qatari and Qatar-based talents, the programme had 16 short films in competition this year.

Fatma Hassan Alremaihi, Festival Director and Chief Executive Officer of the Doha Film Institute, said: “We are proud to work with our local filmmakers, whose films are a reflection of our nation and its diversity.  Made in Qatar is our window to the world, and presents our authentic stories and highlights the abilities of our talents. The participation of every talent at this programme is an award in and of itself, and the journey of success has just started.”

They were evaluated by a jury comprising Turkish actress Tuba Unsal, Dr. Amal Al Malki, Founding Dean of the College of Humanities and Social Sciences at Hamad Bin Khalifa University and Irish filmmaker Collin McIvor. In their deliberation notes, the jury observed that the films stood out for their narrative strength and creative approaches, and cited the evaluation process as highly competitive.

On Sh’hab, Dr. Amal Al Malki said: “The story is introduced on a magical background where the setting and the landscape more than indicate a space in time but also evoke nostalgic feelings towards a romantic past that we haven’t lived in.”

Commenting on Just Another Memory, Colin McIvor observed: “The film is very powerful, rich in human emotion dealing with conflict, loss and healing. The use of live projection and an evocative soundscape to illustrate the inner and outer turmoil was extremely effective.”

On the Special Jury Mention for Nasser Goes to Space, Tuba said: “This is a very special film that brings out a child’s imaginary world through animation, and we found it especially worth this special mention.”

For Fatima Al Nahdi’s performance in Gubgub, the jury noted: “While it was competitive, there was one performance that stood out to us. Fatima is a promising young actress and her talent will surely take her far.”