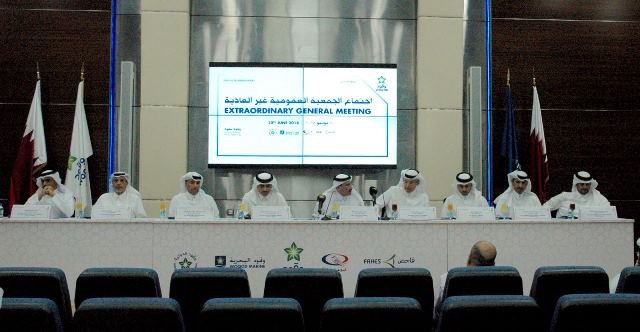 Qatar Fuel (WOQOD) Extraordinary General Assembly (EGM) Chaired by Ahmed Saif Al-Sulaiti, Chairman of the Board of Directors held its meeting on Sunday today where the EGM amended Article 9-1 of the company Articles of Associations to raise the non-Qatari ownership to 49% of the company share capital and to raise the limits of ownership to the one shareholder to 1%.

It is worth noting that WOQOD attempted to convene its Extra Ordinary General Assembly meeting on 6th and 9th of May 2018 respectively but was postponed for today due to lack of the necessary quorum.

Engineer Al-Muhannadi indicated that this amendment came in order to give effect to the ‎instructions of Qatar Petroleum to its listed affiliate companies, and also to address the request of ‎Qatar Stock Exchange to undertake the said amendments with the purpose of enhancing the ‎investment attractiveness of Qatari companies, after classification of the State of Qatar was raised ‎by MSCI and a number of international indexing agencies to the level of emerging markets, thus ‎becoming the largest emerging market in the region. ‎

The amended Article 9-1 of WOQOD Articles of Associations reads as follows:‎

‎”Except for the owner of the privileged ‎share, Shafallah Center and the State of ‎Qatar (as defined in Qatar Financial ‎Market Authority Decision No. 1 of ‎‎2016), the Qatar Foundation for ‎Education, Science and Community ‎Development, The Qatar Investment ‎Authority and Qatar Holding Company, ‎no natural or legal person may at any ‎time – directly or indirectly – hold shares ‎in the Company in excess of 1% of the ‎issued capital.‎

Subject to the provisions of the above ‎paragraph, non-Qataris may hold a total ‎percentage of the capital of the ‎Company not exceeding 49% of the ‎issued capital in accordance with the ‎provisions of Law No. 9 of 2014 ‎regulating the investment of foreign ‎capital in economic activity”.