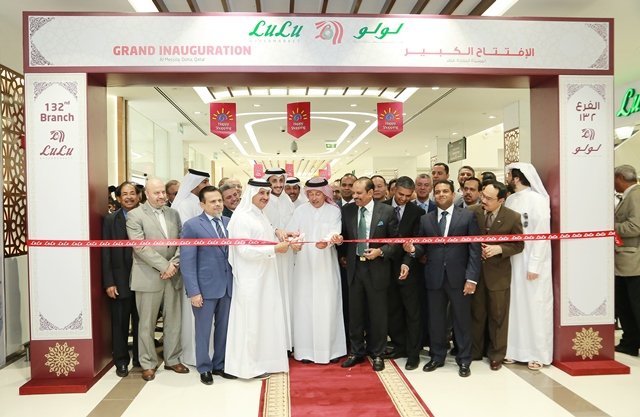 Yusuff Ali MA, Chairman of Lulu Group, Saifee Rupawala, CEO, Mohamed Althaf, Director and other senior executives of Lulu were also present at the event along with a large number of residents.

The hypermarket, which is 7th in Qatar and 132nd of the group, is spread over an area of about 150,000 square feet and will serve the residents of Al Messila, Khalifa Town, Bin Omran, AlSadd and its surrounding areas with easy access and ample parking.

Yusufali MA, on the occasion said “we are very happy to unveil our latest hypermarket in Qatar which will bring world class shopping nearer to people. Our main emphasis is on showcasing the biggest range of “Free From” products such as Gluten free, lacto-free, sugar free, fat free, etc. that have been specially flown-in from our own sourcing offices in UK, US, Brazil and Far East.”

“The excitement surrounding the opening has been building among the residents of this region for several months, and we believe this store will be as popular with shoppers as our other existing stores” he added.

The new hypermarket showcases a fresh food section consisting of a wide assortment of fruits, vegetables, dairy products, poultry, meat and fish and a hot food and bakery section. There is also a huge area dedicated to department store, which includes garments, electronics, IT products, stationery and home appliances.

The hypermarket also features the widest choice of world-class brands and product lines at the fairest prices. The hypermarket is tailored to meet the needs and modes of modern day shopping with world class interiors and well-planned retail floor layout that are focused on customer convenience. The ample aisle space also ensures an uncluttered, fast and hassle-free shopping environment. The outlet also has extensively laid out counters and liberal parking space.

“We are very excited about the economic stability and growth prospects of Qatar, under the visionary leadership of Sheikh Tamim bin Hamad Al Thani, the Emir of Qatar and we are fully committed to play our role in the further development of this great country” Yusuffali said.