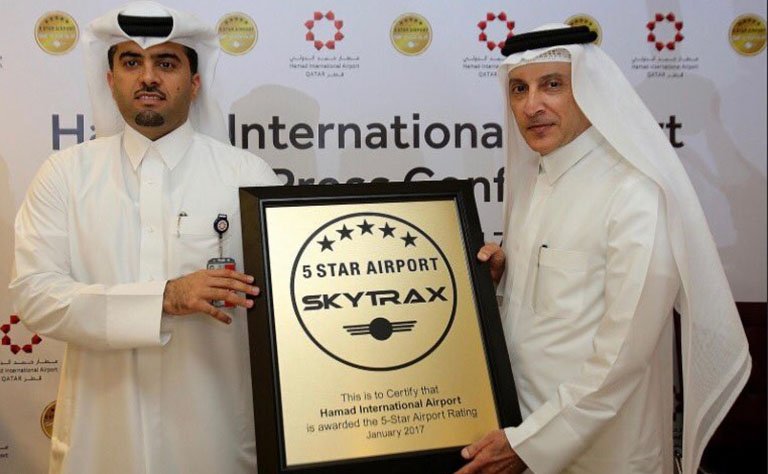 Hamad International Airport (HIA) today joined the top tier of global airports becoming the sixth airport in the world to receive the ‘5-Star Airport’ designation by Skytrax, the London-based aviation institute and the gold standard for conveying the passenger’s voice in airport and airline rankings. This makes HIA the first ever airport in the Middle East to earn this acclaimed title.

The highest rating – five stars – has previously only been awarded to five other airports worldwide: Singapore, Seoul, Hong Kong, Tokyo-Haneda and Munich.

This recognition is particularly timely as it comes after a year of reaching a number of strategic milestones at HIA, including the introduction of its iBeacon enabled mobile app, the launch of the Smart Airport features in the terminal, the operation of the dual passenger train shuttle to concourses D and E and the opening of multiple duty free stores. Moreover, HIA has continued to work closely with Qatar Museums adding multiple international and local art installations across the terminal.

Qatar Airways Group Chief Executive, Akbar Al Baker, said: “Hamad International Airport was designed and built in the modern era, taking into account what passengers want most – convenience and service. HIA more than exceeds passenger expectations by providing what passengers want in an environment that is beautiful, thoughtful and welcoming. HIA’s success is apparent in the fact that it is now at capacity, and the third phase of its development is highly anticipated. The airport serves more than 30 million passengers every year, and will grow to 50 million, yet each passenger can design their own experience at the airport, whether it is shopping in the world-class Qatar Duty Free premium stores, relaxing in one of its 12 lounges, resting comfortably in the Airport Hotel or using one of the many amenities at the Vitality Spa including the squash courts and the swimming pool. The airport experience is designed to be as memorable as the journey.”

Engineer Badr Mohammed Al Meer, Chief Operating Officer of Hamad International Airport said on the occasion “Joining the elite of airports and being the first airport in the Middle East to earn five stars from Skytrax is an honor, and a direct result of the thousands of people who ensure HIA operates smoothly every day, every flight. No matter how long our guests are with us, we strive to make their journey flawless and memorable. This acknowledgement is highly gratifying, and will continue to motivate us to create an exceptional experience for everyone.” Mr. Edward Plaisted, CEO of Skytrax said: “We extend our congratulations to Hamad International Airport for achieving this 5-Star Airport recognition, as well as being the first airport in the Middle East to gain this status. This accolade brings the challenge that 5-Star Airports find their customers become ever more demanding, and we have every confidence that HIA will continue to both maintain and improve standards as we move forward into 2017”.

With just three years of operations, HIA has garnered world-class awards and recognition, including Skytrax Middle East’s Best Airport in 2015 and 2016, Skytrax Best Staff Service in the Middle East 2016 and previously Best Airport Award at the Future Travel Experience (FTE) Asia Awards in 2015.