Pakistan Prime Minister Woos US Companies to Invest in Pakistan 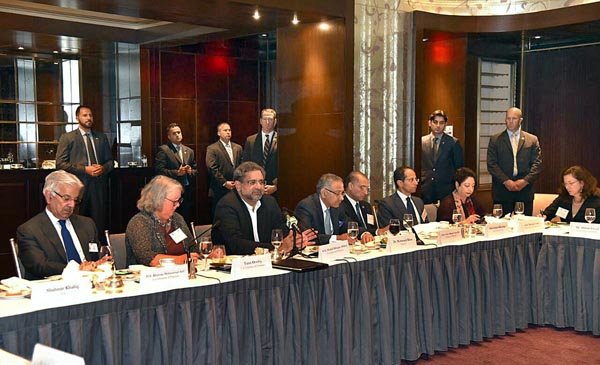 Prime Minister Shahid Khaqan Abbasi Wednesday wooed the US companies to invest in Pakistan, a land of opportunities, that ensured secure environment and promised lucrative and safe returns.

Pakistani Prime Minister is in New York attending 72nd session of United Nations General Assembly.  On the sidelines, he was addressing today at a luncheon attended by heads and representatives of leading US companies organized by the Pakistan-United States Business Council here at a hotel.

The Prime Minister said Pakistan was slated to be the 20th largest economy by the year 2025, it would have its 60% population below the age of 30 and a huge 100 million middle class.

“The potential is all out there and it needs to be realized,” the Prime Minister said.

He recalled his meeting with President Donald Trump last night at the reception and also pointed to his “very
productive” meeting with the US Vice President Mike Pence and said the American leadership was very positive about Pakistan.

He said he too assured that his country was committed to fight and eliminate terrorism from its soil. He said the government of Pakistan was fully aware of the needs of the investors and would ensure that the needs of the foreign companies were fully catered to.

Shahid Khaqan dismissed the falsified perception regarding security concerns in Pakistan and said a number of
US companies were already working in Pakistan and doing a good business. He mentioned the General Electric that was working on several projects in Pakistan.

“When you come to Pakistan, you are in very safe hands,” he said.

He said the US companies could capitalize and benefit from the huge potential of the China Pakistan Economic Corridor, in which China had already pledged to inject US 60 billion dollars.

He said the CPEC would open up new routes to the Central Asian Republics and pointed that new infrastructure, roads and power projects were being built at a fast pace.

The Prime Minister said the basic requirement of continuity for the business community was truly reflected in
the recent transition of power, following the orders of the Supreme Court of Pakistan. He said only after a gap of four days, the government was fully operational again and serving the masses.

He said the country’s macro-economic indicators had improved, the growth rate had risen from 2.6 percent four
years back to 5.3 and would be a sustained 6 percent from next year.

He said the country’s stock exchange was the best performing in the region and the world, while the rates of
investment in the road projects had risen from a meager US 300 million to US 11 billion annually.

He said by the year 2018 an additional power of 10,000 MW would be added to the national grid, while other projects were underway to meet the needs of the future.

Similarly he said the demand for natural gas had also been met by the construction of a modern Liquified Natural Gas terminal, a 1000 km long transmission line that were feeding three gas powered electricity generation plants.

All completed in mere 20 months time, a record indeed, the Prime Minister said.

He said work was also going on at a fast pace for the construction of huge water reservoirs that would also generate electricity.

Prime Minister Abbasi said a “quantum change” had been ushered in Pakistan in the past four years. Allaying the fears and security concerns he said Pakistan was at the forefront in the fight against terrorism.

The country had rendered huge sacrifices, with over 6500 security personnel killed, besides 21000 civilian lives
lost, but it had eliminated a number of bases of terrorism and was moving to make Pakistan fully secure and safe.

He said the country also suffered a colossal US 120 billion economic loss in its fight to make the world a safer place to live.

He said Karachi was once amongst the six most dangerous cities in the world, but today it could not be found in such a top 50 list.

Chairman Pakistan-US Business Council Dr Mahmood Khan pointed to the seamless transition in the country and said the US companies were very optimistic about investment opportunities in the country.

He said the Pakistan was a vibrant, growing market which promised a growing job market  and a booming economy. He said the council would continue to encourage the US companies to explore new avenues of cooperation and investment in the diverse sectors of Pakistan.

The event was also attended by the Foreign Affairs Secretary of Pakistan  and ambassadors of Pakistan to the US and the UN.