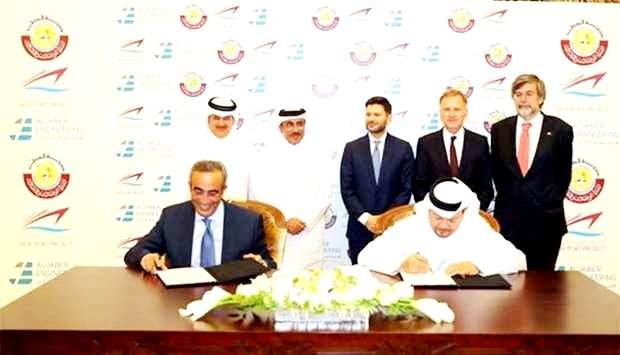 Qatar will build a QR1.6bn food storage and processing facility at Hamad Port capable of supplying stockpile for three main commodities – rice, sugar, and edible oils, for 3mn people for two and a half years, it was announced on Sunday.

Minister of Transport and Communications Jassim Seif Ahmed al-Sulaiti made the announcement after a signing ceremony between the New Port Project (NPP) Steering Committee and Al Jaber Engineering (JEC), the main contractor and designer of the Strategic Food Security Facilities Project.

Al-Sulaiti said the facilities will be built on a 530,000 Sqm area adjacent to Hamad Port, adding that the project consists of specialised facilities for the processing, manufacturing and refining of rice, raw sugar and edible oils, which “will be available for local, regional and global use”.

He said that Phase 1 of the Strategic Food Security Facilities Project is expected to be completed in 26 months.

Speaking to reporters on the sidelines of the event, New Port Project executive director Maisar Jamil el-Qutami said the facility will have a daily capacity of 300 metric tonnes of rice, 300 mt of raw sugar and 200 mt of edible oils.

“The project has the flexibility to add other commodities, and it is capable of producing animal feeds and food stocks from rice and sugar byproduct,” said el-Qutami, who added that the facility could spare 30% of its production for export.

The facilities will operate as a fully-functional standalone terminal, while 500m of Hamad Port’s wharf will be dedicated for the berthing and discharging of the ships, the Minister said.

He said German, Italian and Swiss companies like German Ipro, Global Port, Bühler, German BIA and C M Bernardini will be involved in the project.

Al Jaber Engineering CEO Osama Hadid told Gulf Times that companies from the three countries have already submitted their proposals for the supply of equipment and machinery.

“Naturally, the client wants the best quality and we would also want to provide high-quality projects so, we will be co-operating with the best names in the fields of food processing and food storage,” Hadid pointed out.
Al-Sulaiti said the project will be handed over to the Ministry of Economy and Commerce once completed, signalling the start of Phase 2, which will involve private sector companies.