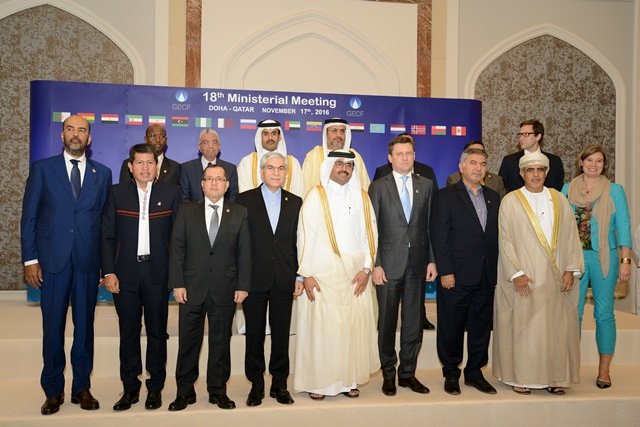 The 18th Ministerial Meeting of the Gas Exporting Countries Forum (GECF) was convened in Doha, State of Qatar on Thursday, November 17, 2016 under the Chairmanship of Dr. Mohammed Bin Saleh Al-Sada, Minister of Energy and Industry of Qatar, as President of the Ministerial Meeting.

The Meeting was attended by Algeria, Bolivia, Egypt, Equatorial Guinea, Iran, Libya, Nigeria, Qatar, Russia, Trinidad and Tobago, United Arab Emirates and Venezuela as well as Azerbaijan, Iraq, the Netherlands, Norway, Oman and Peru as Observers. The Chairman of the Executive Board and the Secretary General attended the meeting.

In his opening remarks, the President of the Ministerial Meeting highlighted that the energy market in general and the gas market in particular are experiencing rapid changes and characterized by ample supply, slower demand growth and lower prices.

He said that the changing dynamics of the gas markets are presenting both challenges and opportunities that have to be carefully examined and, with more cooperation and coordination among member countries, appropriate measures should be taken to address them properly.

Dr. AlSada emphasized the role of the GECF as a Forum of leading exporters of gas that have an important role to play in satisfying world energy needs, in a manner that is environmentally friendly and consistent with climate change mitigation and adaptation efforts. He reiterated the commitments of GECF to continue to be a reliable source of gas in the world.

The President of the Ministerial meeting also commended the work done by the Executive Board and the Secretariat in various aspects especially in completing the GECF Outlook 2040 and the Long Term Strategy (LTS).

Moreover, the Minister stressed the need for closer cooperation among Member Countries to ensure the stability of markets and sustainability of gas supply and promote natural gas share in the energy mix in the long run.

The Ministers listened to two presentations, the short-term gas market report as well as the development of the gas market in the long term based on the GECF Outlook and discussed the challenges and opportunities of the gas market.

The Ministers approved the Long Term Strategy (LTS) and mandated the Executive Board to develop a five year action plan for its implementation. The LTS is to be reviewed every 5 years.

While emphasizing the importance of security of both supply and demand, the Ministers reiterated their commitment to continue to be reliable suppliers and long term partners with their customers. In this context, they attached greater importance to dialogue and interaction with all gas market stakeholders and players.

The Ministers underlined the momentum created by the Paris agreement and recalled the important role of gas in responding to environmental concerns, both in terms of air quality and climate change, given the environmentally friendly characteristics of natural gas that make it a fuel of choice.

It was also decided that the 19th Ministerial Meeting of the GECF will convene in Moscow, Russia on the 4th of October 2017.

The Ministers also approved that the 4th GECF Gas Summit will be held in Bolivia in 2017.

The Ministers expressed their appreciation to Sheikh Tamim Bin Hamad Al-Thani, Emir of the State of Qatar.

The Ministers also expressed their appreciation to Dr. Mohammed Bin Saleh Al-Sada, Minister of Energy and Industry of the State of Qatar, and to the Government of Qatar for their hospitality and excellent arrangements made for the Meeting.

9,592 Troops Of 36 Countries Serving In Afghanistan

Kabul, 18 April 2021 (Anadolu News) In line with US President ...
END_OF_DOCUMENT_TOKEN_TO_BE_REPLACED