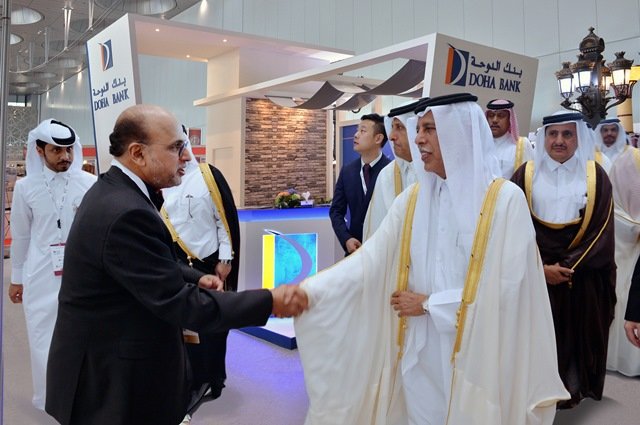 Four days long “Made in China” exhibition inaugurated by Ahmed bin Abdullah Al Mahmoud, Deputy Prime Minister and Minister of State for Cabinet Affairs of Qatar at the Doha Exhibition and Convention Centre.

Ahmed bin Abdullah Al Mahmoud highlighted the role of Qatar’s private sector in enhancing relations between Qatar and China through initiatives like “Made in China”. Deputy Prime Minister said that Qatari and Chinese governments have decided to improve bilateral relations. He said that the exhibition will offer an opportunity for Qatar to tap into China’s world-class technological advancements, bringing both countries close in terms of productivity and innovation.’

As per Doha Bank Qatar report GCC states provide more than 50% of China’s energy needs, including petrochemical products and metal industries. Qatar has launched Renminbi Centre in Doha which is an example of Qatar-China strategic relations.

The International and Commercial Bank of China (ICBC) is the clearing bank for the Chinese currency deals in Qatar.

In 2012, Industrial and Commercial Bank of China (ICBC) got approval to open branch in Saudi Arabia.

Chinese companies are operating specifically within the logistics, aviation and energy sectors in the UAE. China and UAE signed a $5.5bn currency swap deal in Jan 2012. In March 2013, Agricultural Bank of China started a branch in Dubai. There are more than 300,000 Chinese nationals who are working and living in the UAE, in addition to over 4,200 Chinese companies.

Kuwait-China trade had surged from $8.5 billion in 2010 to more than $13 billion in 2014. In June 2014, Kuwait and China signed agreements and memorandam of understanding (MoUs) to boost their ties and cooperation in the areas of economy, investment, energy, culture, education and civil aviation.

KIA has stake in agriculture bank of China. KIA was also granted a $1 bn license by China’s central bank in 2012 to invest in its domestic interbank bond market. In 2012, Industrial and Commercial Bank of China got approval to open a branch in Kuwait.

China is Qatar’s fifth partner in an initiative launched by Qatar Museums to build cultural ties between Qatar’s residents and other countries around the world. China supports the holding of China-Qatar Cultural Year in 2016 to push forward bilateral relations between people-to-people and cultural exchanges.

In January 2012, China National Petroleum Corp (CNPC) and its partners Qatar Petroleum and Royal Dutch Shell agreed to push ahead with plans for a $12.6 b refinery and petrochemical complex in East China. In May 2012, Petro China signed an agreement to acquire 40% of exploration and production rights for Qatar’s Block 4 from GDF Suez Qatar.

In March 2011, Qatar signed an $879 m contract with China Harbor Engineering Co (CHEC) for the construction of the first phase of Qatar’s New Doha Port.

Qatar and China has decided to strengthen strategic relationship.