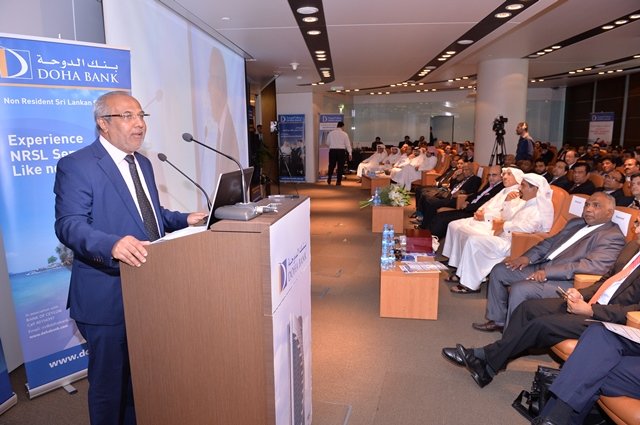 Doha Bank in collaboration with Embassy of Sri Lanka in Qatar, Board of Investment of Sri Lanka and Ministry of City Planning & Water Supply, Sri Lanka hosted business and investment forum in Doha Bank Auditorium, Doha, Qatar on 20th November 2016.

The country has announced an increase in value added tax from 11 percent to 15 percent. The government fiscal deficit expanded to 6.9 percent of GDP in 2015. The Sri Lankan government has identified the Tourism sector as a key growth area in the post conflict development era, with an target of attracting 2.5 million visitors by 2016. Tourism arrival has increased by 240 % since 2009, as the number of arrival was recorded in 2015 was 1.7 mn compared to 0.5 mn in 2009. Priority has been given for development of required accommodation facilities and other related infrastructure for leisure activities. ”

Rauff Hakeem, Minister of City Planning and Water Supply, Sri Lanka highlighted on Qatar-Srilanka Bilateral relationships, he said “The country is major exporter of Textiles & Garments, Tea, Rubber products, spices and imported of refined petroleum, Crude, Planes, helicopters, Cars and others. In March 2015, Qatar and Sri Lanka signed three agreements for co-operation in sports, youth affairs and media sectors. Bananas and plantains was the main export to Qatar from Sri Lanka, claiming 31% of the total exports to Qatar in 2014. Sri Lanka is keen on seeking Qatari investment in tourism, power and health sectors. Sri Lanka has free health care and has increased the health care expenditure from 1.8 percent to three percent of the GDP. Sri Lanka has signed bilateral Investment Protection Agreements (IPA) with 28 countries. The country has a very independent system of courts which can redress any concerns of investors.”

Dr. R. Seetharaman, CEO of Doha Bank gave insight on global economies. He said “The recent IMF outlook had given global growth of 3.1 percent in 2016. A more subdued outlook for advanced economies following the June U.K. vote in favor of leaving the European Union and weaker-than-expected growth in the United States. As a result, the 2016 growth forecast for advanced economies has been marked down to 1.6 percent. Emerging and developing economies expected to grow by 4.2 percent this year. Japan economy revised upwards in 2016 and 2017 to 0.5 percent and 0.6 percent respectively. As global growth remains sluggish, the prospect of an extended shortfall in private demand leading to permanently lower growth and low inflation becomes ever more tangible, particularly in some advanced economies where balance sheets remain impaired.”

Dr. R. Seetharaman highlighted on Qatar economy and Qatar Sri Lanka Bilateral relationships. He said “Qatar has budgeted for revenues of 156 billion riyals and expenditures of 202.5 billion riyals in 2016 and post a deficit of 46.5 billion riyals. Health, education and infrastructure are the major areas which are going to give thrust by Qatar this year. Major infrastructure expenditures, would include railways, the new Doha port, several large roadways and the expansion of electricity, water and sewage networks.

The government came up with $9bn bond issue this year. The government is also taking steps to increase non-oil revenues, focusing on indirect taxes and levies. Qatar has increased stamp duty and plans to levy additional taxes on alcohol, tobacco and energy drinks starting in 2017.

Qatar plans to start applying VAT in 2018. Non hydrocarbon as a % of Real GDP will increase from 51.6 percent in 2016 to 54.4 percent of real GDP. Qatar and Sri Lanka can look forward to explore more relationships in the areas of trade and investment. Total foreign ownership is permitted for investment in most of the areas of the economy and there is no restriction on foreign exchange transaction relating to current account payments. The Article 157 of the island’s constitution guarantees the safety of investment protection treaties and agreements approved by parliament by a two thirds majority. On the whole Qatar can be a potential trade and investment partner for Sri Lanka.”

20 January 2022 By Ashraf Siddiqui More than 7,000 books of different ...
END_OF_DOCUMENT_TOKEN_TO_BE_REPLACED