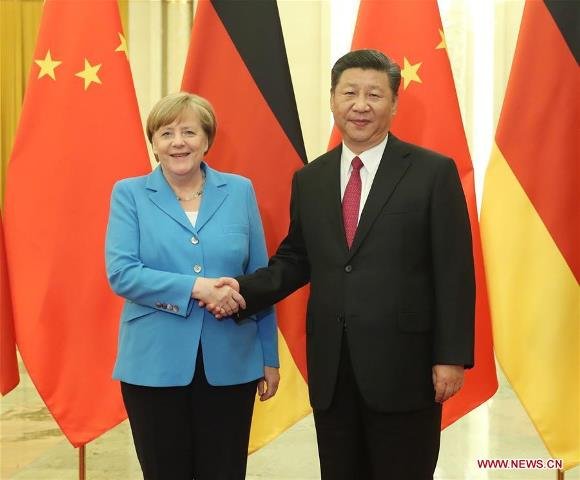 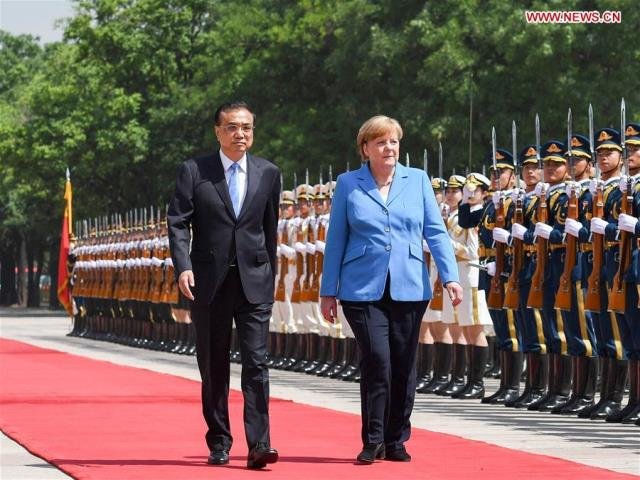 Xi welcomed Merkel on her 11th visit to China, hailing the great importance she has attached to bilateral ties.

Since the two countries launched an all-dimensional strategic partnership in 2014, bilateral ties have improved significantly with the cooperation width and depth reaching an unprecedented level, said Xi.

He said China and Germany must set an example of win-win cooperation, take the lead in promoting China-Europe ties, advocate the new type of international relations and override the ideological differences for cooperation.

“This should be the direction that bilateral ties will move to in the next stage,” said Xi.

He called on both sides to maintain high-level exchange, enhance top-down planning on bilateral ties, encourage bilateral cooperation in various areas and give full play to dialogue mechanisms.

“We welcome Germany to grasp opportunities arising from China’s new round of reform and opening up,” said Xi.

He said the two countries should expand industrial and market cooperation, driven by innovation, and jointly explore the third-party markets.

The two countries need to enhance cultural and people-to-people exchanges to consolidate the basis of friendship, and jointly deal with global challenges, said Xi.

“We would like to promote global governance and multilateralism together with Germany within the multilateral frameworks,” said Xi.

For her part, Merkel said she was glad to visit China soon after her re-election as German Chancellor in March.

Echoing Xi’s comments on Germany-China ties, Merkel said China is an important member of the international community and an important trade partner of Germany.

As Germany-China ties have entered into a new era, Germany is ready to take the new opportunities of China’s reform and opening up to expand cooperation on trade and investment as well as cultural and people-to-people exchanges, she said.

On European integration, Xi said China has always firmly supported Europe in choosing a path of integration. He added that China hopes the European Union will maintain unity, stability, openness and prosperity.

China is willing to work with the European side to advocate multilateralism and send more messages that are clear, predictable and confidence-boosting, for the development of international situation that is stable and conducive to all, Xi said.

Merkel said because the international situation has undergone great changes, Germany and China must enhance communication and coordination on international affairs, intensify cooperation within multilateral frameworks such as the G20.

The two sides also exchanged views on international trade, the Iran nuclear issue and other issues of common concern.

Merkel is paying an official visit to China on Thursday and Friday at the invitation of Chinese Premier Li Keqiang.

Also on Thursday, Li Zhanshu, chairman of the Standing Committee of the National People’s Congress, met with Merkel, calling for more cooperation between the two countries’ legislatures.