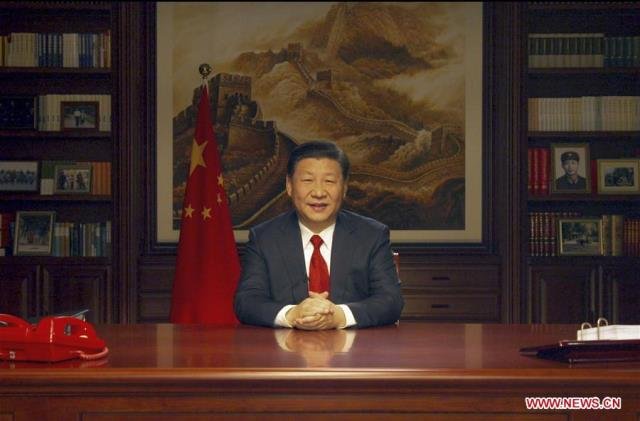 “China will resolutely uphold the authority and status of the United Nations, actively fulfill China’s international obligations and duties, remain firmly committed to China’s pledges to tackle climate change, actively push for the Belt and Road Initiative, and always be a builder of world peace, contributor of global development and keeper of international order,” Xi said.

Once again, the remarks sent out a strong message of the times concerning the future of mankind. It is not hard to tell that China, while pursuing its own development, also attaches great importance to the development of the international community.

Currently, the international situation is undergoing profound and complex changes, and the world has reached a critical juncture. While peace and development remain the theme of the time, the world is faced with multiple challenges including the rise of anti-globalization, terrorism, unilateralism and xenophobia.

It is an era of expectation with anxiety.

In an uneasy world, China has offered its wisdom to address global challenges, providing the world with global public goods such as the Belt and Road Initiative, the Asian Infrastructure Investment Bank and the Silk Road Fund.

Proposed by Xi in 2013, the Belt and Road Initiative aims to build trade and infrastructure networks connecting Asia with Europe and Africa on and beyond the ancient Silk Road routes. It comprises the Silk Road Economic Belt and the 21st Century Maritime Silk Road, which is originally composed of one route spanning westward from China to Europe, and the other extending from the country’s eastern coastline down to the Indian Ocean.

These efforts of China which aim to build new platforms for international cooperation have boosted regional interconnectivity and stability, and have created new driving forces for global growth.

“The Chinese people are ready to chart out a more prosperous, peaceful future for humanity, with people from other countries,” Xi said.

As a contributor to world peace and a driving force for global development, China is committed to improving global governance and creating more opportunities for developing countries on the world stage.

In this regard, China has proposed building a community with a shared future for mankind featuring mutual respect, diversity and dialogue based on equality and peaceful co-existence among different civilizations.

Over the past few years, the vision has been well received by more and more countries worldwide and has been transformed from an idea into an action.

The 19th National Congress of the Communist Party of China, held in Beijing in October 2017, set building a community with a shared future for mankind and building a new type of international relations as an overall goal of China’s diplomacy.

The year of 2018 is the first year for implementing the goal. With detailed plans for development and international cooperation, China will surely create more opportunities that can benefit countries worldwide and make greater contributions to world peace and development.

— It is only natural that hard work pays off, and it brings changes for the better every day. In 2017, we held the 19th National Congress of the Communist Party of China, embarking on a new journey towards the all-round building of a modern socialist China.

— I would like to say, Bravo to the great creativity demonstrated by fellow Chinese.

— People have adhered to patriotism and devotion with neither complaint nor regret, which makes me feel that the common people are the greatest and happiness is generated through hard work.

— “A nine-storey tower begins with a pile of earth.” To translate the blueprint into reality, we must neither rush upon fantasy nor be guided by the sound of falsehood. We shall work steadily and in a down-to-earth manner.

— With the 40th anniversary of the reform and opening up policy as a turning point, we shall cut paths through mountains and build bridges across rivers, overcome all difficulties and carry reform through to the end.

— It is our solemn commitment to lift all rural residents living below the current poverty line out of poverty by 2020. Once made, a promise is as weighty as a thousand ounces of gold.

— China will … always contribute to the building of world peace and global development, and the safeguarding of international order.

— I understand what concerns the people the most includes education, employment, income, social security, healthcare, elderly care, housing, and the environment. You have reaped the harvest from your hard work. You have also encountered quite a bit of frustration.

— The CPC committees, governments and officials at all levels shall always take into consideration the safety and necessities of the people whole-heartedly, and regard the work of benefiting the people as their top political achievement. They shall pay attention to and share the concerns of the people and create conditions for them to live a better and happier life.