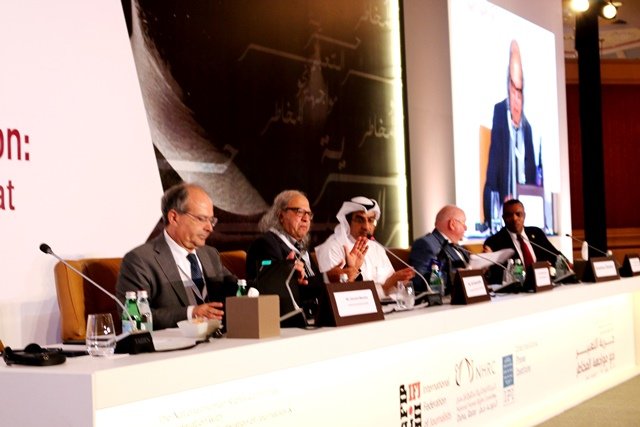 The representatives of international, regional and national organisations of journalists, human rights and freedom of expression groups yesterday unequivocally condemned the threats by the governments of Saudi Arabia, the UAE, Egypt and Bahrain, demanding the closing down of Al Jazeera and other media outlets including Arabi21, Rassd, Al Araby Al Jadeed and Middle East Eye.

The two-day conference titled “Freedom of Expression, Facing up to the Threat” also supported the developing of a new binding international instrument dedicated to the safety of journalists, including a specific enforcement mechanism, which would improve the international response to attacks against journalists and the culture of impunity.

The representatives unanimously adopted Recommendations at the International Conference titled “Freedom of Expression, Facing up to the Threat”, organised by the National Human Rights Committee of Qatar in co-operation with the International Federation of Journalists (IFJ) and the International Press Institute (IPI). They also expressed total solidarity with journalists and other media and ancillary workers at Al Jazeera and other targeted media.

In the set of unanimously passed Recommendations, Conference recognises the numerous resolutions adopted in recent years by the UN General Assembly, the Security Council and the Human Rights Council deploring the impact of attacks against journalists and other media workers on the public’s right to information and freedom of expression, and expressing concern at the chilling effect that such attacks, especially when perpetrated with impunity, have on the media as a whole.

Conference supports the developing of a new binding international instrument dedicated to the safety of journalists, including a specific enforcement mechanism, which would improve the international response to attacks against journalists and the culture of impunity. A Convention on the Safety of Media Workers, potentially negotiated within the UN General Assembly, would present the advantage of systematising the relevant obligations inferable from multiple legal texts and making them more accessible to decision-makers and law-enforcement authorities and bringing together the applicable human rights and humanitarian law norms, tailoring them to the situation of journalists.

Conference finally believes that current legal provisions should be expanded beyond the obligation to protect journalists against attacks on their life, and include forced disappearances and kidnapping (by state or private actors), arbitrary arrest, intimidation, deportation/refusal of entry, confiscation/damage to property and new forms of violence experienced by journalists during the 2011 Arab Spring, and further develop Human Rights Council resolutions S-2/1 and S-9/1 concerning the attacks on media installations and allowing access as well as safe media corridors in conflict zones.

Conference therefore calls on governments: To recognise all recommendations, covenants, declarations and resolutions promulgated or endorsed by international organisations such as the UN and its agencies such as Unesco; To implement forthwith the UN latest plan of action and enhance their working with organisations dedicated to the safety of journalists and media workers; To acknowledge and accept their obligations to give journalists protection as civilians in situations of conflict; To strengthen national mechanisms and laws including criminal laws and overhaul justice system to end impunity and to provide judicial and legislative assistance to prevent serious violations of international humanitarian laws including the targeting of journalists.

On media freedoms, Conference calls on governments to recognise the right of media organisations to report information freely and without interference from government and to allow citizens to access information on their own government and institutions in the cause of transparency and accountability.
It also calls on governments to limit their ability to curtail media access and set the limits of reporting and access to information and allow transparent and independent adjudication on decisions relating to publication.
Conference also acknowledges the vital role played by trade unions in supporting freedom of expression for journalists and defending the right of journalists to report on often contentious issues and hold power to account.

Recognising the danger in establishing legal limits on expression, and accepting the risks in allowing states the ability intervene on online information, conference calls on governments and media organisations to work to challenge hate speech, including misogyny, racism, Islamophobia and anti-Semitism, and extremism, and to promote the idea that encouraging a plurality of ideas and ideologies is the solution to challenge bigotry and prejudice.

Conference also calls on journalists to respect codes of conduct that demand fairness, accuracy and the need to oppose the scapegoating of minorities and pandering to prejudice and ignorance.

On international workers rights, Conference recognises that the freedom of expression and in particular of the media is inextricably linked to the freedom of media workers to carry out their professional role without fear of intimidation or discrimination.