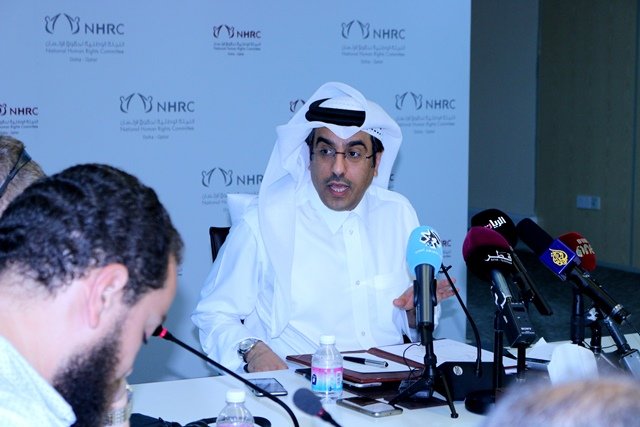 Chairman, National Human Rights Committee Qatar, Dr. Ali Marri during his briefing this late evening in Doha told that a number of Human Rights World Bodies understands the grievances of citizens of the Saudi led blockade including Saudi Arabia, United Arab Emirates, Bahrain and Qatar. These organizations have issued statements and have asked to lift the blocked immediately and condemning the blocked resulting in severe human rights violations and sufferings of students, division of families, assets, properties and businesses.

NHRC Chairman told it’s efforts in this regard on international and regional levels.

1. What has happened can only be described as criminal collective punishment on an international level. The National Human Rights Committee has received complaints from 700 victims. We have heard many tragic testimonies of families being ripped apart. Women, children and even men have broken down in tears as they relate their cases. We cannot accept this, and we cannot remain silent. We can tell you their stories, but we want you to hear them directly.

2. The Committee has been in daily contact with the United Nations High Commissioner for Human rights. His Royal Highness Prince Zeid Ra’ad Al Hussein spoke to us yesterday of the concrete steps he is taking to find a solution to the unjust and inhumane humane rights violations resulting from the embargo against Qatar.

3. There has been a major response by international bodies and NGOs who have issued statements and made calls in favour of lifting the embargo. Yesterday Amnesty International published a detailed report documenting the flagrant human rights violations resulting from the embargo. Following on from this the NHRC and Amnesty are coordinating on proceeding with international legal action.

4. To the same end, the NHRC has been in regular contact with Human Rights Watch regarding the serious humanitarian consequences of the blockade for ordinary citizens.

Human Rights Watch says it plans to send its own team of experts to Doha to examine complaints first-hand and interview the victims face-to-face.

5. The NHRC has been in touch with over 300 international and regional organisations, and has provided them with detailed reports and facts on the situation and those affected, and has asked them to act to end the siege.

6. Many Arab and international organisations have also issued statements condemning the embargo, and have made appeals to see it lifted.

8. We have spoken to the Saudi Human Rights Commission, the United Arab Emirates Human Rights Society, and the National Human Rights Organisation in Bahrain, and have asked them to act quickly to address the violations of the rights of Qatari citizens and the citizens of their countries as a result of the siege, and they have all recognised the poor humanitarian and human rights situation. We await their further response.

9. The National Human Rights Committee (NHRC) of Qatar is to employ an international legal firm to pursue compensation for Qatari and GCC citizens who have approached the committee after being affected by the current unjust boycott imposed on Qatar by Gulf states.

The Committee will today hold a consultative meeting with the Qatar Lawyer’s Association and a group of Qatari lawyers to prepare to legal complaints.

10. The Committee will meet with the United Nations High Commissioner for Human Rights in Geneva, his HRH Prince Zeid Ra’ad Al Hussein, followed by a press conference at UN Headquarters to inform the international community of the human rights situation.

The NHRC delegation will also hold a seminar in the European Parliament in Brussels, and has scheduled discussions with a number of EU human rights and foreign affairs officials.