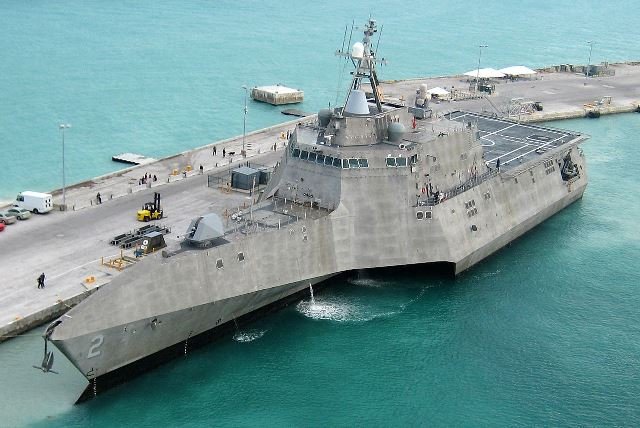 The Navy will commission its newest Independence-variant littoral combat ship, the future USS Gabrielle Giffords (LCS 10), during a ceremony on Saturday, June 10, at 12:00 p.m. CDT on the waterfront in Galveston, Texas.

Adm. William Moran, the Vice Chief of Naval Operations, will deliver the ceremony’s principal address.
Dr. Jill Biden, wife of former Vice President Joseph Biden, is serving as the ship’s sponsor. In a time-honored Navy tradition, she will give the order to “man our ship and bring her to life!”

“The commissioning of USS Gabrielle Giffords adds the advanced capability of a versatile warship to our nation’s growing fleet,” said the Honorable Sean Stackley, acting Secretary of the Navy. “Today’s ceremony is also a testament to the skill and dedication of our nation’s remarkable shipbuilders, who will be remembered for decades to come as LCS 10 deploys around the world to protect our freedoms.”

The future USS Gabrielle Giffords is a fast, agile, focused-mission platform designed for operation in near-shore environments yet capable of open-ocean operation. It is designed to defeat asymmetric “anti-access” threats such as mines, quiet diesel submarines and fast surface craft.

Each LCS sea frame will be outfitted with a single mission package made up of mission modules containing war fighting systems and support equipment. A dedicated ship crew will combine with aviation assets to deploy manned and unmanned vehicles and sensors in support of mine countermeasures, anti-submarine warfare or surface warfare missions.