‘ We Stand with Khashoggi ‘, Turkish-Arab Journalists 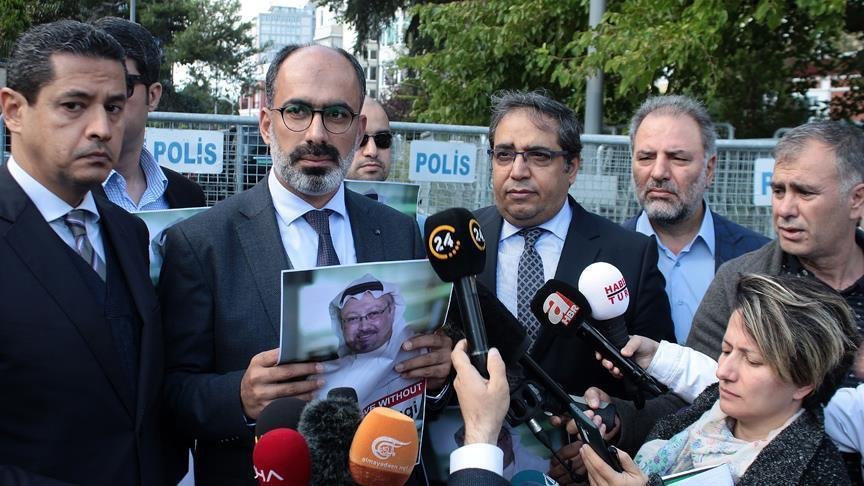 A group representing Turkish-Arab journalists on Friday voiced solidarity with one of their own who is missing, fate unknown.

“The disappearance of Jamal Khashoggi, the well-known Washington Post journalist, by the Saudi Arabian Consulate on Oct. 2 at around 13.30 p.m. local time has been a matter of widespread speculation and debate,” said Turan Kislakci, head of the Turkish-Arab Media Association (TAM), in a gathering outside the Istanbul consulate, demanding answers from officials.

“He has not been heard from since he entered the Consulate General of Saudi Arabia in Istanbul. The Turkish-Arab Media Association has closely followed up on the developments of his situation since the moment of his disappearance.”

Kislakci said the group has contacted both the consulate and the Saudi ambassador in Ankara, seeking clarification.

“However, neither provided a satisfactory or clear statement,” he said.

“As journalists, we are worried about the fate of Jamal. We don’t know whether he is alive or dead. Saudi Arabia’s statements in this direction are far from satisfactory.”

Kislakci said that on Friday the group will launch its first action in solidarity with Khashoggi — a Saudi journalist — with the help of journalists and writers from all over the world.

“Protests will be held in front of Saudi embassies in the West as well as the Saudi Consulate in Istanbul,” he said.

If Khashoggi has come to any harm, the group will argue that this is against international law, he added.

Turkey’s Foreign Ministry on Wednesday summoned the Saudi ambassador to discuss the case, according to diplomatic sources.

Walid Bin Abdul Karim El Khereiji was summoned on Wednesday afternoon, said the sources, who asked not to be named due to restrictions on speaking to the media.

Khashoggi has been missing since he entered the Saudi consulate in Istanbul this Tuesday.

The consulate also said on Twitter that they are working in coordination with Turkish authorities to investigate the issue.