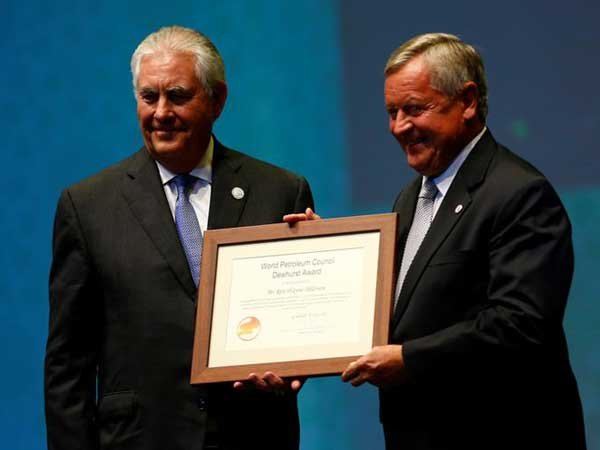 U.S. Secretary of State Rex Tillerson arrived in Kuwait on Monday for talks aimed at resolving the crisis triggered by the the cutoff of links with Qatar by Saudi Arabia and Arab allies.

In Doha, a Western diplomat said creation of a “terror finance monitoring mechanism” would feature in the talks, but declined to elaborate. Saudi Arabia, Bahrain, UAE and Egypt imposed sanctions last month, accusing Doha of aiding terrorism, something it denies.

The State Department said Tillerson, who forged extensive ties in the Gulf as CEO of ExxonMobil, would hold talks with leaders in Kuwait, Qatar and Saudi Arabia.

He was flying from Istanbul where he addressed World Petroleum conference. On the occasion, U.S. Secretary of State Rex Tillerson was offered the Dewhurst Award, an honor named after the founder of the congress, for his “outstanding contribution to the oil and gas industry,” as ExxonMobil’s Chairman and CEO from 2006 to 2016.

R.C. Hammond, a senior adviser to Tillerson, said he would explore ways to end a stalemate following Qatar’s rejection of 13 demands issued as condition for ending sanctions.

“The trips to Saudi Arabia and Qatar are about the art of the possible,” said Hammond, who added that the 13 demands “are done” and “are not worth revisiting as a package. Individually there are things in there that could work”.

The demands included the closing of Al Jazeera, the Qatar-based pan-Arab television network, and a Turkish military base in Qatar. Saudi Arabia and its backers, which accuse Al Jazeera of being a platform for extremists and an agent of interference in their affairs, have threatened further sanctions against the emirate. Al Jazeera denies the allegations.

Riyadh and its allies accuse Qatar of financing extremist groups and allying with Iran, the Gulf Arab states’ regional rival. Qatar denies that it supports militant organizations, and many experts see the blockade as an attempt by Saudi Arabia to rein in Qatar’s increasingly independent foreign policy.

The crisis has hit travel, food imports to Qatar, ratcheted up tensions in the Gulf and sown confusion among businesses, while pushing Qatar closer to Iran and Turkey which have offered support.

The United States worries the crisis could affect its military and counter-terrorism operations and increase the regional influence of Tehran, which has been supporting Qatar by allowing it to use air and sea links through its territory.

Qatar hosts Udeid Air Base, the largest U.S. military facility in the Middle East, from which U.S.-led coalition aircraft stage sorties against Islamic State in Syria and Iraq.

U.S. President Donald Trump has expressed support for Saudi Arabia in the dispute.

Hammond said it was critical that not only Qatar, but Riyadh and its allies take steps to halt any financial support flowing to extremists groups, especially following the defeat of Islamic State in the northern Iraqi city of Mosul.

“We want progress on terrorism financing. The president strongly believes that if you cut off financing, you cut off the ability of terror to take hold in new areas,” Hammond said.

Moreover, he said, “the longer that this struggle is in place, the more opportunity there is for Iran.”