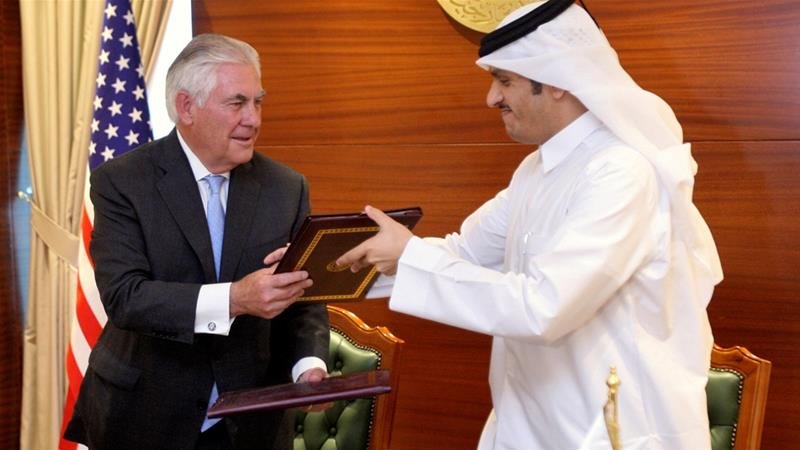 Qatar and the United States have signed an agreement to help combat “terrorism financing” during a visit to Doha by US Secretary of State Rex Tillerson.

Qatar’s Foreign Minister Sheikh Mohammed bin Abdulrahman Al Thani and Tillerson made the announcement on Tuesday during a joint press conference in the Qatari Capital.

Tillerson is in Doha pushing for dialogue to resolve a dispute between Qatar and its neighbouring Gulf countries.

Sheikh Mohammed said the signing was “not related to the recent crisis and the blockade imposed against Qatar”.

“Today, Qatar is the first country to sign a memorandum of agreement with the US, and we call on the countries imposing the siege against Qatar to join us as signatories to this MOU,” he said.

Tillerson praised Qatar for signing the deal, and for committing to the effort “to track down and disable terror financing”.

“The US has one goal: To drive terrorism off the face of the Earth,” Tillerson said.

Saudi Arabia, Bahrain, Egypt and the United Arab Emirates accuse Doha of funding what they call terrorism – something Qatar denies.

The four countries cut ties with Qatar on June 5 and imposed a land, air and sea blockade on the country.

Tillerson is on a four-day trip to the region to try and help find a solution to the crisis.

On Wednesday, he will meet the foreign ministers of Saudi Arabia, UAE, Bahrain, and Egypt in Jeddah.