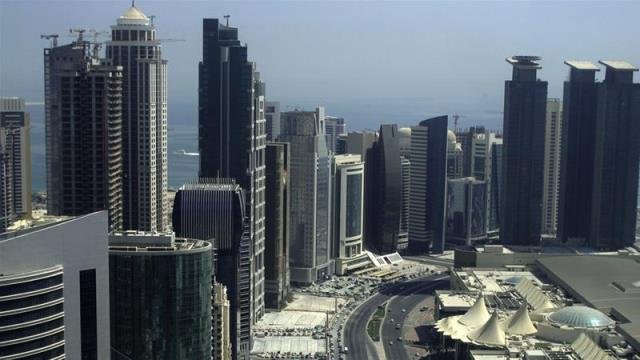 Avigdor Lieberman, Israel’s defence minister, has praised the measures against Qatar, saying “there is no doubt that this opens very many possibilities of cooperation in the struggle against terror”.

The Saudi Ports Authority has notified shipping agents not to receive vessels carrying Qatari flags or ships that are owned by Qatari companies or individuals.

Egypt’s foreign ministry said in a statement the country was suspending air and sea links to Qatar, citing national security.

Turkey is ready to help however it can to bring the disputes to a manageable level, said Foreign Minister Mevlut Cavusoglu speaking at a joint press conference in Ankara.

Cavusoglu also said: “Turkey sees the unity and solitary among Gulf states as our own unity”.

Food shipments sent from Iran can reach Qatar in 12 hours, said Reza Nourani, chairman of the union of exporters of agricultural products.

UAE’s Port of Fujairah says all vessels flying the flag of Qatar or destined for Qatar will not be allowed to call at the port.

Iranian Foreign Ministry spokesman Bahram Ghasemi was quoted on the ministry’s website as calling for a “clear and explicit dialogue” among the feuding nations. Iran says rising tensions among its Arab Gulf neighbours threaten the interests of everyone in the region.

Decision made because of the Maldives “firm opposition to activities that encourage terrorism and extremism”.

Egypt’s foreign ministry says it has given the Qatari ambassador in Cairo 48 hours to leave the country and has ordered its own envoy in Doha to return home, also within two days.

The faction led by Khalifa Haftar, one of three rival governments in Libya, announced it is cutting ties with Qatar.

Reports of trucks being lined up across the border in Saudi Arabia unable to enter Qatar.

FIFA issued a short statement saying it has spoken with “the Qatar 2022 Local Organizing Committee and the Supreme Committee for Delivery Legacy handling matters relating to the 2022 FIFA World Cup”.

It said: “We have no further comments for the time being”.

Air Arabia, a low-cost airline based in the United Arab Emirates, said it is suspending flights to Qatar along with other Emirati airlines over a growing diplomatic crisis.

Air Arabia says its flights will be suspended from Tuesday “until further notice”.

Saudi Arabian Airlines says it is suspending flights to the Qatari capital, Doha.

The airline, also known as Saudia, posted on Twitter that it would be halting flights from Monday morning, without elaborating.

11:05am – FlyDubai flights cancelled from Tuesday

Dubai’s budget carrier FlyDubai says it has canceled its flights to Qatar amid a diplomatic dispute between it and other Arab countries.

The carrier said on Monday that, starting Tuesday, all flights would be suspended. It offered no other details.

FlyDubai’s decision follows that of Emirates and Etihad in canceling flights to Doha.

Yemen’s internationally recognised government has cut relations with Qatar and says it supports the decision by the Saudi-led coalition to end Qatar’s participation in the war on the Houthis in Yemen. Qatar has been part of the coalition since March 2015.

The government of President Abed Rabbo Mansour Hadi says it severed ties with Qatar in part over is support of extremist groups in Yemen “in contradiction with the goals announced by the countries supporting the legitimate government”.

10:20am – Emirates flights cancelled from Tuesday

The Dubai-based airline Emirates says it is suspending flights to Qatar amid a growing diplomatic rift.

Emirates said on its website on Monday flights would be suspended until further notice starting Tuesday.

US Secretary of State Rex Tillerson told reporters in Sydney: “It is important that the GCC remain a unified [front]”.

Tillerson does not expect the rift “to have any significant impact, if any impact at all, on the unified fight against terrorism”.

Qatar hosts the largest US military base in the Middle East.

Qatar says there is “no legitimate justification” for four Arab nations to cut diplomatic ties.

Qatar also says the decision is a “violation of its sovereignty”, vowing to its citizens it will not affect them.

8:35am – Etihad suspends flights from Tuesday

Abu Dhabi-based airline Etihad said it is suspending flights to Qatar from June 6 “until further notice”.

Etihad gave no reason for the decision. It is the flag carrier of the United Arab Emirates.

The United Arab Emirates and Egypt have cut diplomatic ties with Qatar.

Both the UAE and Egypt made the announcement on their state-run news agencies within minutes of each other.

6am – Saudi cuts ties with Qatar

Saudi Arabia says it is cutting diplomatic ties to Qatar and it has pulled all Qatari troops from the ongoing war in Yemen.

Saudi Arabia made the announcement via its state-run Saudi Press Agency early on Monday. It appeared to be timed in concert with an earlier announcement by Bahrain similarly cutting ties.

The dispute between Qatar and the Gulf’s Arab countries escalated recently over a hack of Qatar’s state-run news agency. It has spiraled since.

5:50am – Bahrain cuts ties with Qatar

Bahrain says it is cutting diplomatic ties to Qatar amid a deepening rift between Gulf Arab nations.

Bahrain’s Foreign Affairs Ministry issued a statement early on Monday saying it would withdraw its diplomatic mission from the Qatari capital of Doha within 48 hours and that all Qatari diplomats should leave Bahrain within the same period.