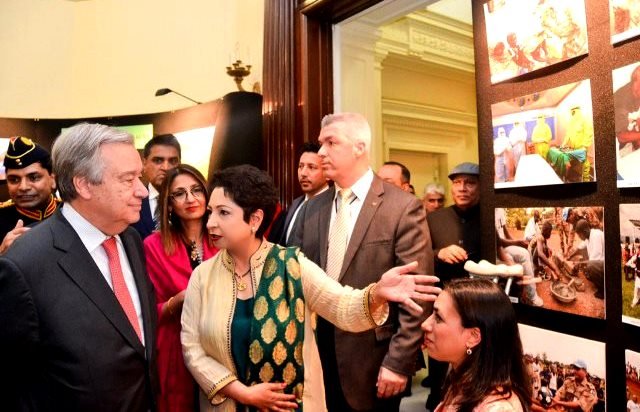 “Pakistan plays an important role at the UN,” Guterres said while briefly speaking to Pakistani journalists at the largely-attended reception hosted by Pakistan UN Ambassador Maleeha Lodhi on Thursday evening.

The secretary-general especially paid tributes to Pakistani peacekeepers serving several U.N. missions, noting that some of them had made the ultimate sacrifice for the cause of peace. With 7,136 troops, Pakistan is among the world’s top three countries with largest peacekeepers deployed in UN Missions around the world.

Since 1960, over 1,69,000 Pakistani personnel have served with professionalism and distinction in 23 countries and 41 UN missions.
On arrival at the Pakistan Mission to the United Nations, where the reception was held, the UN chief was received by Ambassador Lodhi and senior officials of the mission. He was conducted to some of displays set up to project Pakistan’s history, culture and its contribution to the United Nations. Also displayed were the photographs of Pakistani women who have excelled in their respective professions.

When the secretary-general saw the portraits of Quaid-e-Azam Mohammad Ali Jinnah and Allama Iqbal, he remarked, “I am familiar with Pakistan’s history, having read some books about the country. He also said he knew Pakistan well as he made several visits to the country in his capacity as the U.N. High Commissioner for Refugees.

Over one hundred Ambassadors to UN attended the reception. They included China, Turkey, Iran, Saudi Arabia,Italy, Russia, Australia, India and a number of ambassadors from Latin America and Arab countries. Also present were senior United Nations officials and members of the Pakistani community.

Earlier, addressing the gathering, Ambassador Lodhi spoke about the significance of the day and highlighted the role and contribution of Pakistan at the United Nations. “As a steadfast advocate for the respect of human rights and fundamental freedoms for all, including the right to self-determination of people living under foreign occupation, Pakistan has championed the ideals of human dignity and respect at the international stage,” the Pakistani envoy said.

“In many conflict zones across the world, the sapling of peace has been nourished by the ultimate sacrifice of Pakistani peace-keepers,” she said. “Pakistan is proud of the service of our blue helmets.” The Pakistani envoy told the audience that her country had achieved a major turn-around in the security and economic domains, pointing out that Pakistani people’s resilience remained its greatest strength. “A functioning democracy, an independent judiciary, vibrant media and an active civil society, provide the necessary foundations for Pakistan’s long-term progress and prosperity.”

Pakistan, she said, is home to one of the world’s oldest civilizations — Mohenjo Daro, Harappa and Taxila. “They stand as abiding testimonies to the indelible imprint that my land and its people have left over ages on humanity’s march towards progress and development.

“From the forbidding heights of the Himalayas to the scenic plains and the vast wilderness of our deserts, Pakistan is a kaleidoscope of diverse colours, languages and climates. “Yet, despite our differences, we are unified by the love of our land, an indomitable spirit and sense of solidarity to help navigate the complex pathways of life.”

The reception was rounded off with a soul-stirring rendition of “Dil, Dil, Pakistan,” by Imran Ahmed, a young Pakistani student of journalism at Columbia University.