UN Center on Children and Armed Conflict To Open in Doha 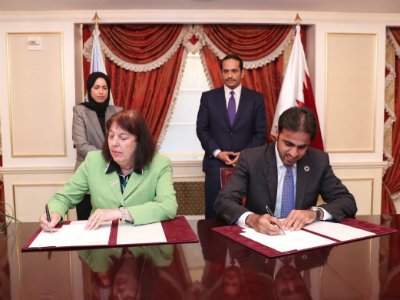 Sheikh Mohammed bin Abdulrahman Al-Thani , Deputy Prime Minister and Minister of Foreign Affairs of State of Qatar attended on Friday signing of an agreement between Qatar Fund For Development and the Office of the Special Representative of the UN Secretary-General for Children and Armed Conflict to open and finance a center for children and armed conflict in Doha. It was signed on the sidelines of the meetings of the UN General Assembly in New York.

Under the agreement, the State of Qatar will support the core resources of the UN center with $1.5 million for a three-year period, and will support the Doha-based office with $1.65 million over three years, to promote knowledge and skills related to the protection of children affected by armed conflict in the region.

The office will provide training and documentation appropriate to the needs of the region and capacity-building.