Qatar Attends Meeting of FMs of GCC, Egypt and Jordan with US Secretary of State 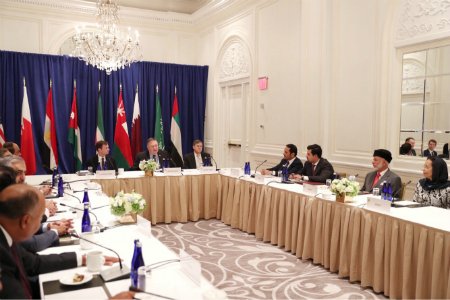 The meeting tackled the most important security and regional challenges facing the Middle East region and how best to deal with them.

Sheikh Mohammed bin Abdulrahman Al-Thani stressed the importance of the meeting and unifying the visions of collective security in the Middle East, in addition to the need for any new alliance to build on existing institutions and reactivate their role.

He added that successful alliances are based on common values such as respect for the sovereignty of nations and the aspirations of their peoples, as well as on constructive goals that benefit all participating countries on the basis of fair standards applied to all. He also touched on the Gulf crisis as it paralyzed one of the most important regional blocs that has contributed to maintaining balance and security in the Middle East for decades.

Deputy Prime Minister and Minister of Foreign Affairs of Qatar said, in this context, that the real test of this alliance is to resolve the Gulf crisis, a matter which will demonstrate the credibility and effectiveness of this alliance.