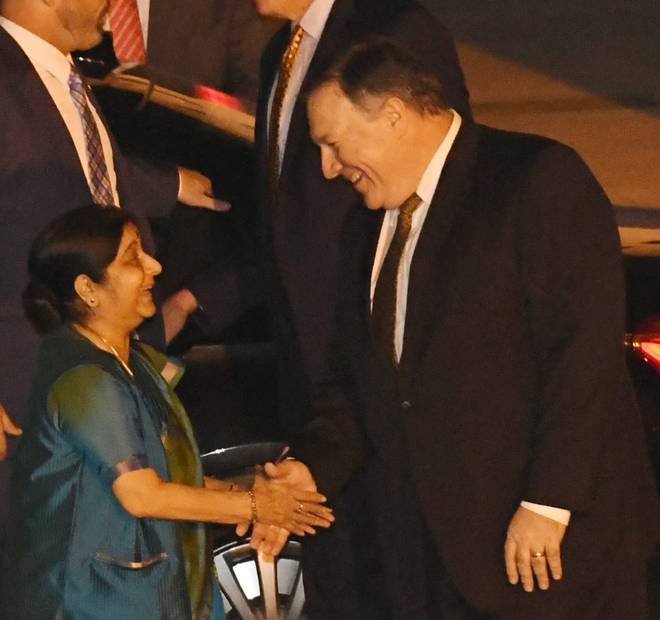 India’s defence ties with Russia and energy links with Iran will not be the primary focus of the inaugural India-U.S. “2 plus 2” dialogue, American Secretary of State Michael Pompeo indicated ahead of his arrival here.

Pompeo and U.S. Secretary of Defence General James Mattis, who arrived here on Wednesday evening for the dialogue with their counterparts External Affairs Minister Sushma Swaraj and Defence Minister Nirmala Sitharaman, will head their respective teams for the two-level talks.

The dialogue is the highest level discussion of the year between the two countries.

Thursday’s discussion is expected to take a comprehensive look at strategic ties between India and the U.S. On top of the discussion is the likely US plans to have a landmark agreement on communication and coordination on security issues – COMCASA and sale of high tech military items. The Hindu had reported on Monday that both sides are likely to fall short of formally signing the COMCASA document.

The COMCASA agreement will allow exchange of secure communication between the two militaries and facilitate the sale of high tech encryption systems to India. While finer details are still being worked out, some experts have cautioned that signing the deal might expose India’s critical security communication to the United States.

The “2 plus 2” dialogue was planned during Prime Minister Narendra Modi’s visit to Washington DC last year and issues related to Iran and Russia that are important to the administration of President Donald Trump are expected to be discussed.

However, sources have indicated that India prefers to avoid third party mentions in bilateral talks.

The U.S. has been demanding that India “zero out” energy supply from Iran, even as Delhi has avoided spelling out how exactly it would comply with the American demand.

The other major U.S. concern is the S400 missile defence shield worth $6 billion that India plans to acquire from Russia. U.S. media sources have reported that both the issues would feature prominently in Thursday’s talks.

Following the formal talks, both Mr. Pompeo and General Mattis are scheduled to pay a visit to Prime Minister Narendra Modi on Thursday afternoon.

Before arriving in India, Mr. Pompeo held discussion in Islamabad with the new Pakistan Prime Minister Imran Khan on regional security and Afghanistan. This is likely to find space in Thursday’s talks, especially while addressing India’s concerns on U.S. support to bring proscribed terrorists like Hafiz Saeed of Lashkar-e-Taiba to justice.

The United States appointed veteran diplomat Zalmay Khalilzad as the special envoy on Afghanistan this week and cut the coalition support aid of $300 million to Pakistan, but the Donald Trump administration is yet to make a common cause with India on how to pursue the banned terror masterminds who target India.