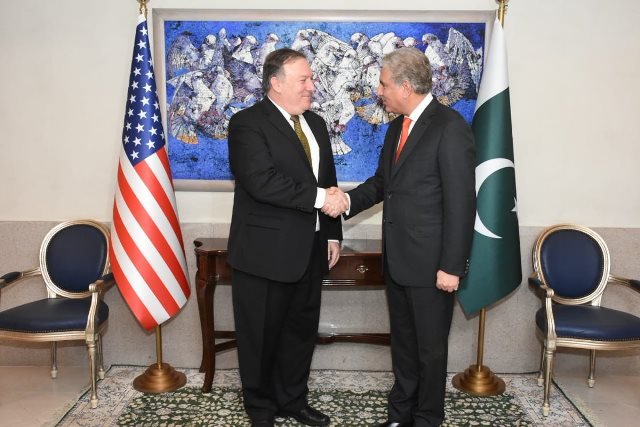 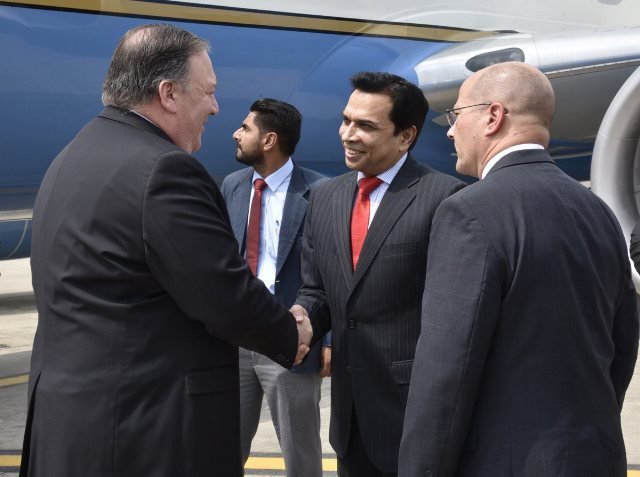 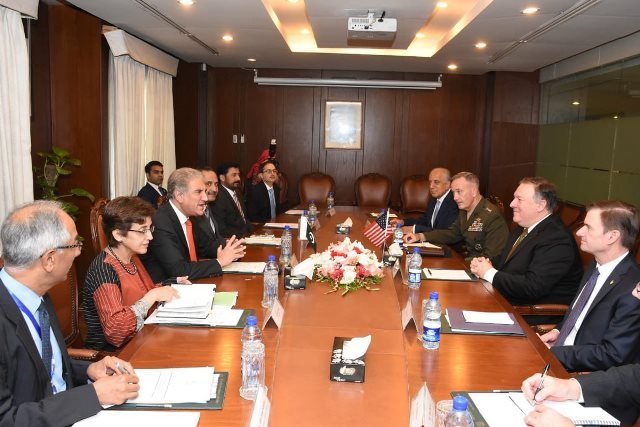 Mike Pompeo, US Secretary of State arrived this morning on an official visit to Pakistan. On arrival at Islamabad Airport was received by Dr. Mohammad Faisal, Spokesperson, Ministry of Foreign Affairs of Pakistan and US embassy officials.

Pompeo along with his members of delegation held bilateral discussions with Pakistani Foreign Minister Shah Mehmood Qureshi at the Foreign Office.

US Secretary of State Mike Pompeo also met Prime Minister Imran Khan, both discussed Afghan peace process and blockage of $300 million in Coalition Support Fund (CSF) among other matters of mutual interest during a meeting in Islamabad on Wednesday.

The US Secretary of State later left for New Delhi.

The US Secretary of State said on Tuesday he was hoping to reset ties with Pakistan ahead of the trip. He also announced that Zalmay Khalilzad, a high-profile former US ambassador,would lead peace efforts in Afghanistan.

“So first stop – Pakistan. New leader there, wanted to get out there at the beginning of his time in an effort to reset the relationship between the two countries,” he said.

“There are lot of challenges between our two nations for sure but we’re hopeful that with the new leadership that we can find common ground and we can begin to work on some of our shared problems together,” added Pompeo.

“Look, I think there is a new government this time, most of this took place long before the prime minister was in power and I hope we can turn the page and begin to make progress. But there are real expectations,” he said.

“I’m hopeful we can convince them to provide that assistance,” he continued, adding that in his conversations with Imran, they had agreed that peace in Afghanistan was a “shared goal.” Pompeo also held out the possibility the military aid could be restored under the right circumstances.

“We were providing these resources when it made sense for the United States because the partnership was in a place where the actions of our two countries made sense to do that,” he said. “If that arises again, I’m confident we’ll present to the president the rationale for that.”

Earlier last week, FM Qureshi avoided a knee-jerk reaction to the Pentagon suspension of the Coalition Support Fund. He said the  amount was not aid, but a reimbursements of expenses incurred in the fight against terrorism. The minister also said that US-Pak communication was nearing complete breakdown during the last government’s tenure.