U.S. Gov’t Shuts Down at Midnight After Senate Recess 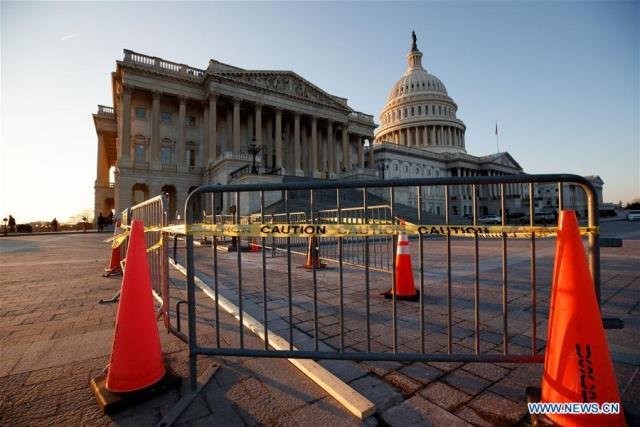 The U.S. government is shutting down at midnight as the Senate went into recess and missed a midnight deadline to pass a short-term funding bill.

Senator Rand Paul on Thursday blocked the Senate from a vote on a short-term funding bill which will fund the government through March 23 and a bipartisan budget package which will set a spending framework for fiscal year 2018 and 2019.

Paul opposed the budget package, saying it will further add debt and fiscal deficit to the government.

The budget package, agreed by the leaders from both Republican and Democratic parties and supported by President Donald Trump, will increase defense and non-defense spending by about 300 billion U.S. dollars for the next two years, and also raise the debt ceiling through March 2019.

The Senate recessed around 11 p.m. Thursday (0400 GMT Friday) with plans to reconvene just after midnight.

The White House Office of Management and Budget (OMB) on Thursday has directed federal agencies to prepare for a lapse in funding.

The budget package which was combined with the short-term spending bill is expected to pass the Senate early Friday, despite Paul’s opposition, according to media reports.

The House is set to vote on the package after Senate’s approval, although its fate remains uncertain in the House.

The package is not to the liking of some House Democrats because it doesn’t address immigration. Meanwhile it will also be challenged by House Republican fiscal conservatives who oppose any increases for non-defense spending and increases in the nation’s debt and fiscal deficit.