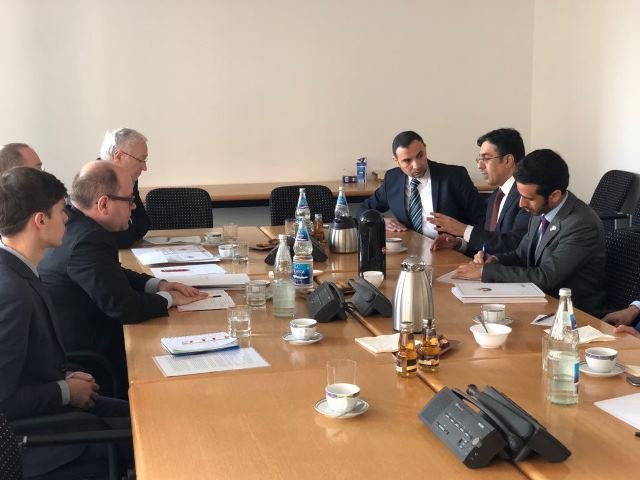 Dr Ali bin Samikh Al Marri, Chairman, National Human Rights Committee of Qatar, invited the German Parliament to send an official mission to Doha to discuss the repercussions of the ongoing siege on Qatar for more than eight months, the serious violations committed by thousands of citizens, depriving them of the most basic human rights.

In his second stop of the European tour,  Dr. Ali Bin Samikh visited the German Capital Berlin, where he held a series of important meetings with a number of officials from the German Foreign Ministry and Parliament, the German Foundation for Human Rights, the World Alliance of Human Rights Institutions. He briefed them on the latest repercussions of the unjust siege imposed on Qatar since the fifth of last June.

On the first day of his visit, Dr. AlMarri held discussions with a delegation from the German Parliament including Martin Batzelt, member of the Parliamentary Committee on Human Rights and a number of MPs.

He pointed out that “the report of the High Commission confirmed that what the National Human Rights Committee spoke of was not allegations, as alleged by the countries of the blockade, but arbitrary and discriminatory violations and punitive measures violated the rights of citizens and residents in Qatar and the countries of the blockade,” and that “the four countries (Saudi Arabia, , Bahrain and Egypt) is continuing to impose severe collective punishment against the people, not to the heart of all international appeals to governments and human rights organizations to demand an immediate end to the blockade. ”

Al-Marri noted that “the blockade countries that launched a scathing attack against well-known human rights organizations, such as Amnesty International and Human Rights Watch, accusing them of bias towards Qatar, have not found it embarrassing to continue in the same arbitrary manner. The degree of questioning the credibility of the High Commission operating under the authority of the United Nations, accusing it of bias to the State of Qatar, in a behavior that reflects the approach of the embargoed countries in defiance of the international community and the lack of respect for the laws and international conventions of the UN organizations.

“Against this arbitrary behavior of the embargoes, we call upon the United Nations and the world to act immediately to defend human rights instruments and to impose strict measures against anyone who attempts to violate human rights and international law, conventions of the United Nations and the Human Rights Council. He stressed them to encourage blocked states to respect and implement the human rights conventions they have committed and to ensure that the unjust embargo are lifted. ”

Dr. Ali Bin Smaikh AlMarri concluded by calling upon the German Parliament to send an official mission to Doha as soon as possible, as in the previous parliamentary missions in Qatar, to review the violations of the embargo countries and to hold witness testimonies directly to monitor their suffering and suffering for eight months, And convey their message to the international community to stop the injustice they are subjected to.

He concluded by stressing that he is prepared to attend a hearing in the German Parliament at the earliest opportunity and to open a discussion with the deputies on the repercussions of the Gulf crisis on human rights and the risks it poses to the security of the region and its threats to international peace and security.