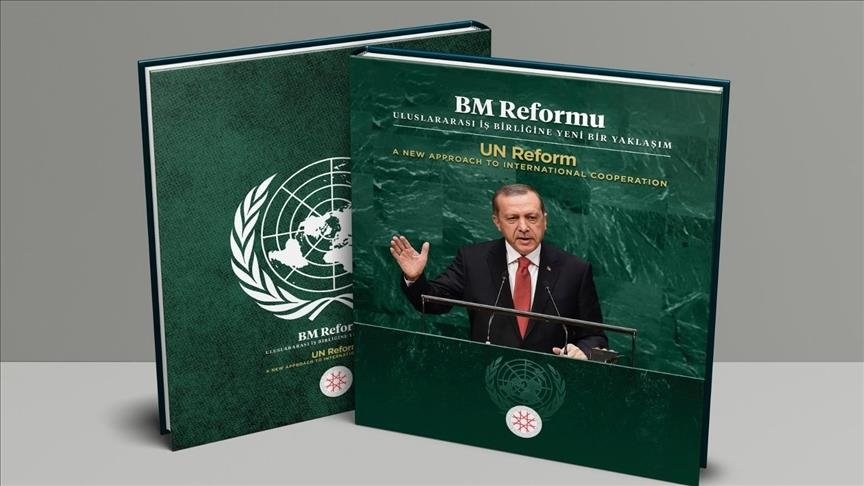 The Turkish Communications Directorate on Saturday released a new book, UN Reform: A New Approach to International Cooperation, explaining the rationale behind Ankara’s initiative to reform the UN and its Security Council.

The book, published both in Turkish and English, explains how the UN and the Security Council, which were established after the World War II, have been insufficient in producing solutions to today’s problems.

The book consists of three parts: “Why Should a UN Reform Be Made?,” “The Importance of the United Nations in the Field of International Peace, Peacekeeping and Humanity’s Problems,” and “UN Reform Rationales and Recommendations.”

The second part discusses the current problems that humanity and the global system face, and the possible international problems that may arise in the future.

The last part of the book includes reform proposals regarding the structure of the UN and its Security Council.

In the presentation part of the book, Turkish President Recep Tayyip Erdogan, who has argued over the years that the “world is bigger than five,” said that because the permanent members of the UN Security Council – the US, UK, France, China and Russia – use their veto power for their own interests, the disadvantaged countries are paying an “unfair price.”

“It is not possible for the UN Security Council, which acts by considering the priorities of only five permanent members, to prevent conflicts and establish peace, stability and security,” he said.

Erdogan said Türkiye has repeatedly argued that a fundamental reform is needed for the UN to fulfill its mission properly and to respond to today’s conditions, threats, security concerns and needs.

Ankara demonstrates a “great diplomatic success” in efforts to end the Russia-Ukraine war, and creating a grain corridor that will solve the global food crisis, he said, adding: “We will continue to show the same effort to implement the necessary reforms in the UN and to meet the world’s need for justice.”

“Türkiye will continue to lead the way for the establishment of a fairer, more equal and more stable global order,” Erdogan stressed.

Doha, 24 Sept. 2022 (QE) QatarEnergy announced that it has selected ...
END_OF_DOCUMENT_TOKEN_TO_BE_REPLACED