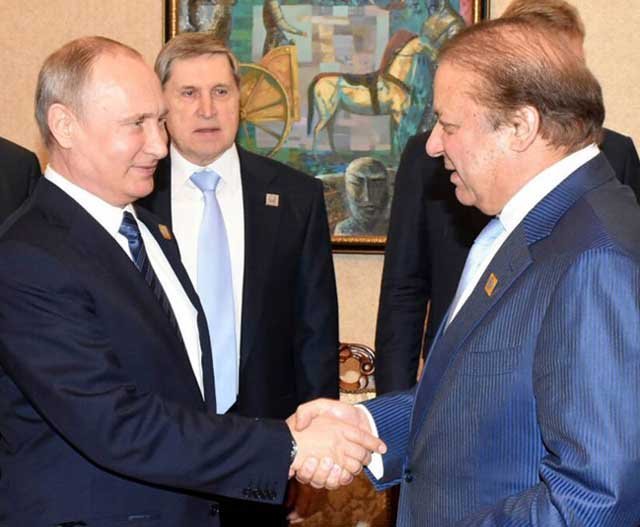 During the meeting, Putin referred to Pakistan as one of Russia’s priority partners in Southeast Asia and Asia as a whole.

Offering condolences for the loss of precious lives in the floods, Putin expressed his country’s willingness to assist affected people in Pakistan, saying Russia has already sent humanitarian aid.

The president stated that relations with Islamabad are improving and that a meeting of the Russian-Pakistani Inter-Governmental Commission (IGC) will be held this fall to discuss ways to not only restore but also increase trade turnover.

“We have good prospects in various sectors: in the field of railway transport, in the energy sector, and there are very interesting and large-scale projects here. This is the so-called Pakistani Stream; we are talking about creating the necessary infrastructure for the supply of liquefied natural gas,” the president said.

“We need to resolve the issue with Afghanistan,” he said, adding, “of course, there are problems related to political stability, but bearing in mind our mutual good relations with the Afghan people, I hope that this problem can be solved,” he said.

For his part, Sharif thanked Putin for sympathy and humanitarian aid, saying that 33 million people have been affected by floods in Pakistan, which also claimed the lives of over 1,400 people, many of whom were children.

“Thank you so much for your support. We received it at a very important (critical) time. We are grateful to you for this,” said the prime minister.

Sharif said he has good memories of his trip to Russia, recalling that the first metallurgical plant in Pakistan was built with the support of the former Soviet Union.

It was the kind of inclusive relationship that developed between Pakistan and your country, he said, adding that he believes Russian-Pakistani cooperation has great potential.

Sharif discussed the devastating impact of this climate-related disaster with Putin during the meeting, according to a statement issued by Prime Minister’s office in Islamabad

He expressed satisfaction with the steady expansion of Pakistan-Russia relations, which he described as based on strong mutual trust and understanding.

“The Prime Minister reaffirmed Pakistan’s commitment to work closely with Russia to further expand and strengthen cooperation between the two countries across all areas of mutual benefit including food security, trade & investment, energy, defense and security,” the statement said.

It was agreed to hold the next IGC meeting in Islamabad at an early date.

Doha, 24 Sept. 2022 (QE) QatarEnergy announced that it has selected ...
END_OF_DOCUMENT_TOKEN_TO_BE_REPLACED