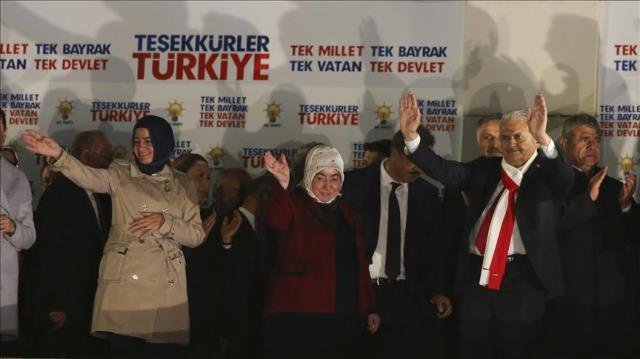 Speaking in Ankara, Yildirim said “I thank and express my gratitude to all our citizens who went to the ballot box with a high turnout, and who protected our democracy.”

Yildirim congratulated over 1.2 million young people who went to the ballot box for the first time today.

Saying that Turkey’s new government system would be put into practice in the 2019 general elections, Yildirim said: “Our nation made its choice, and it confirmed the presidential system.”

He added “This nation once again demonstrated that it will not bow down to any [military] domination, external intervention, or threat.”

Yildirim said that Turkey would protect its unity despite all its differences. “We surely have different opinions and different ideas for solutions, but we will gently protect our unity.”

The premier stressed: “Having different opinions never means getting the upper hand over another.”

Sunday’s referendum asked voters to choose Yes or No on an 18-article bill that would see the country switch from a parliamentary to a presidential system, among other changes.