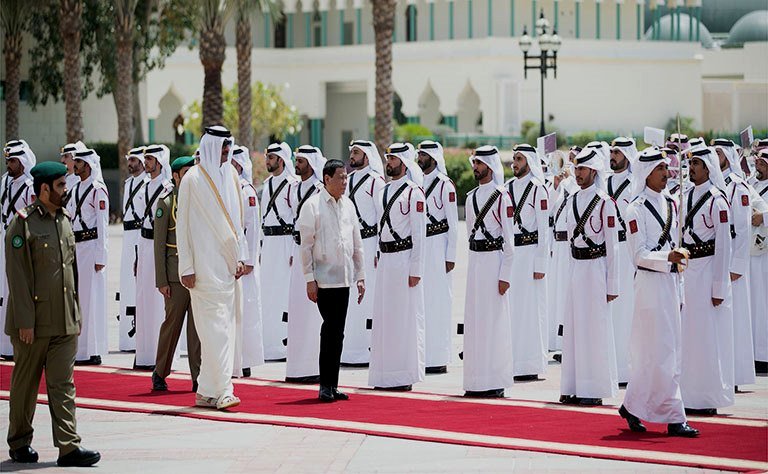 Qatar and the Philippines, led by Emir of Qatar Sheikh Tamim bin Hamad Al-Thani and the President of the Republic of the Philippines Rodrigo Roa Duterte, held Sunday round of official talks at the Emiri Diwan.

Both leaders reviewed bilateral relations between the two countries and means of enhancing them in all fields, especially in infrastructure, agriculture, health and education investments, as well as increasing cooperation in the fields of experience exchange and expatriate labor.

The two sides also discussed a number of regional and international issues of common interest.

Emir of State of Qatar and the President of Philippines oversaw the signing of a number of Memorandums of Understanding (MoU) between the two counties including an MoU in the field of culture between Qatar’s Ministry of Culture and Sports and Philippine’s National Commission for Culture and the Arts.

The two sides also signed a MoU on encouraging and protecting mutual investments between the governments of Qatar and Philippines.

A MoU is signed between both countries on cooperating in the fields of technical and vocational training education between the governments of Qatar and Philippines.

A MoU is signed on cooperating in the health field between the governments of Qatar and Philippines.

Present on the occasion from Qatari side were Deputy Emir of State of Qatar, Sheikh Abdullah bin Hamad Al-Thani, along with a number of Ministers.

From Philippine’s side, the talks were attended led by President Duterte, accompanying Ministers and members of the delegation.

A contingent of Emiri Guards presented a guard of honour to President Rodrigo Duterte.

He and his accompanying delegation were seen off at Hamad International Airport by Dr Mohammed bin Saleh Al Sada, Minister of Energy and Industry, Ali bin Ibrahim Al Malki, Ambassador of Qatar to the Philippines, and Alan Timbayan, Ambassador of Philippines to Qatar.