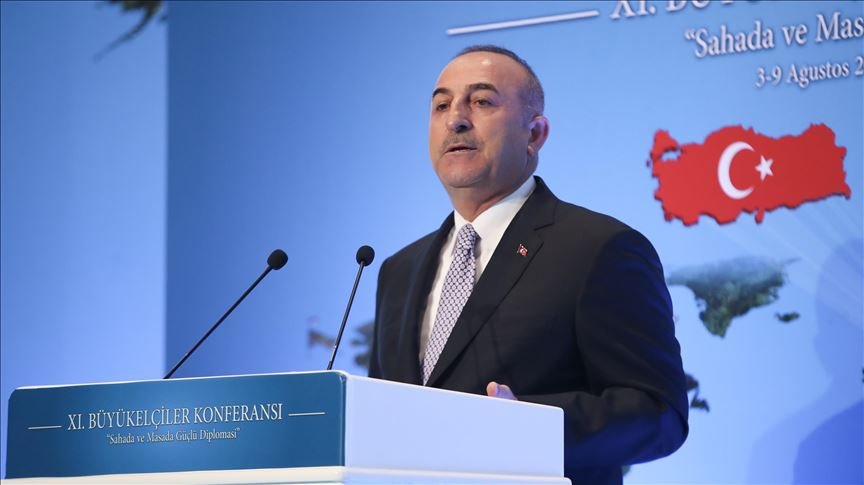 Turkey never ignores any solutions on Cyprus as it is a “national cause for us”, the country’s foreign minister said on Monday.

“Cyprus is our national cause. The equality and security of the Turkish Cypriot people are indispensable. On this basis, we do not exclude any solution,” Mevlut Cavusoglu said in his keynote speech at the 11th Ambassadors’ Conference.

He added: “Our message to everyone interested in the [Eastern Mediterranean] region is the same. If you cooperate with us, everyone wins.”

Turkey will never allow steps that ignore the legitimate rights and interests of Turkey and Turkish Cypriots in the Eastern Mediterranean, the junction of three continents of the world, Cavusoglu said.

He stressed that Turkey backed a common solution in which the resources are equally shared.

Turkey has consistently contested the Greek Cypriot administration’s unilateral drilling in the Eastern Mediterranean, asserting that the Turkish Republic of Northern Cyprus (TRNC) also has rights to the resources in the area.

In 1974, following a coup aiming at Cyprus’s annexation by Greece, Ankara had to intervene as a guarantor power. In 1983, the TRNC was founded.

The decades since have seen several attempts to resolve the Cyprus dispute, all ending in failure. The latest one, held with the participation of the guarantor countries — Turkey, Greece, and the U.K. — came to an end without any progress in 2017 in Switzerland.

Turkey to defend Palestinian cause at all costs

Emphasizing that the factors that led to the Arab Spring still continued, Cavusoglu said the Palestinian-Israeli conflict and security situation in the Persian Gulf were going through a “critical period”.

“In a period when embracing the region is most needed, it is very sorrowful to see the region’s countries so far from being united. Turkey will continue to defend the Palestinian cause at any cost,” he added.

“Asia is becoming the economic center of the world. The international community vies for greater involvement in Asia. Turkey has deep roots in this most dynamic region of the world. Being Asian and in the Asia is as important as being European and in the Europe for us.”

Cavusoglu pointed to the necessity of a new policy in Asia which considers differences in the continent but in a holistic way. “We hereby announce the Asia initiative which is called ‘Asia Anew’. We will further develop our relations within a holistic framework,” he said and added:

“This approach will reflect the basic features of our humanitarian and entrepreneurial foreign policy, which is strong in the field and on the table.”

“Now our Western friends will start complaining again saying, ‘What’s going on? Is it an axis shift in your foreign policy? Has Turkey turned its back to Europe and its face to another place?

“Then let me ask you this: ‘Do you shift the axis of your foreign policy when you go there [Asia]? Why does it become an axis change when Turkey goes there?” Cavusoglu said, adding that Turkey is the axis itself.