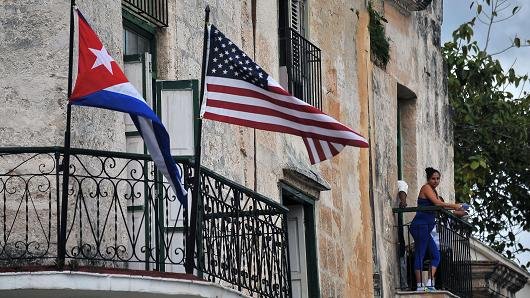 President Donald Trump will unveil a new Cuba policy on Friday that will both seek to empower the Cuban people and severely limit travel to the communist nation, according to senior White House officials.

While Americans will still be able to go to Cuba through one of the authorized types of travel, one common method of visiting the island will be prohibited.

Tourism is technically banned under the embargo, but under the Obama administration, relaxed regulations allowed Americans to visit Cuba under people-to-people travel. The new policy will restrict this kind of travel for individuals. Americans pursuing this type of travel would have to go in groups, the official said.

While the policy goes into effect when the president announces it on Friday, officials said that nothing will be implemented until new regulations are in place. People with imminent plans to travel to Cuba may continue to do so under existing law until then.

The policy will direct related departments to start working on these rules within 30 days, but one official said, however, that once the legislating process begins, the process will “take as long as it takes.”

Meanwhile, there will be no changes to “wet foot, dry foot” policy, which allows Cubans who arrive in the U.S. without visas to stay, an official said. The official said that there also won’t be any changes to regulations on what Americans can bring back from Cuba.

The officials argued that the new policy will fulfill a campaign promise and reverse Obama-era policies that the Trump administration argues have appeased and “enriched” the Cuban military regime.

The main focus of the policy will attempt to shift money away from the military and intelligence services “that contribute to oppression on the island,” one official said. For example, payments to hotels owned by the military will be prohibited.

In a Thursday briefing call, reporters pressed officials on why the Trump administration is emphasizing Cuba’s human rights issues when the White House has previously demonstrated interest in working with other problematic regimes.

A senior White House official responded that the president’s September 2016 comments on the campaign trail still stand. In Miami, then-candidate Trump called for a reversal of Obama’s normalization of Cuba policy, saying he would demand religious and political freedom for the Cuban people as well as the release of political prisoners.

But the White House’s crackdown on Cuba’s human rights record is puzzling, considering Trump has previously praised other countries and leaders with similarly checkered histories, such as Philippines’ Rodrigo Duterte. Trump has previously praised Duterte for his drug crackdown, saying he has done an “unbelievable job” even though the campaign has led to the death of thousands of his own people.

The official said that the administration “will continue to take an aggressive stance” on human rights, but declined to comment on foreign policy related to other nations.