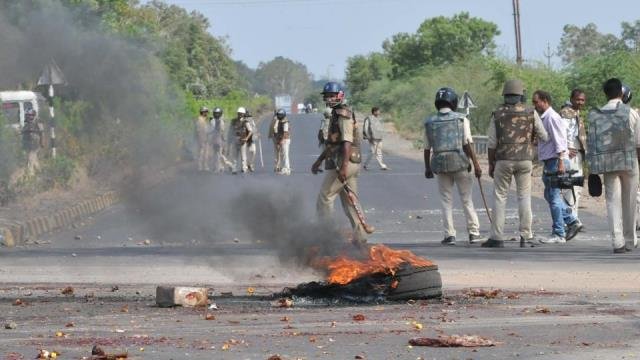 At least five farmers were killed and several injured in Madhya Pradesh’s Mandsaur district on Tuesday when police fired on protesters demanding better prices in the drought-ravaged region that recorded a farm suicide every five hours in 2016-17.

Angry farmers ransacked and set ablaze a police outpost after the firing as the administration clamped curfew on Pipalia town, the epicentre of violence, rushed extra forces and withdrew internet services to tamp down on social media rumours fanning violence.

Throughout the day, the BJP government denied any police firing and confirmed the five deaths only in the evening.

“There were two incidents at Pipalia. In one of the incidents police had to fire in self-defence when a mob gheraoed the police station. In the other incident, the police fired when there was firing from the mob,” home minister Bhupendra Singh said.

Chief minister Shivraj Singh Chouhan announced a judicial inquiry into the firing and compensation of Rs 1 crore each to the kin of the dead and Rs 5 lakh each to the injured. One member of the dead farmers’ families will also be given a government job.

The discontent in the foodbowl states of Madhya Pradesh and neighbouring Maharashtra, where too farmers have launched an agitation over similar demands, has come as a fresh challenge for Prime Minister Narendra Modi, who has made farm sector reforms a priority for his government.

“This govt is at war with the farmers of our country,” Congress vice president Rahul Gandhi tweeted.

From last February to mid-February this year, at least 1,982 farmers and farm labourers committed suicide in MP, an average of one suicide every five hours, data from the National Crime Records Bureau show.

The incident can also impact assembly elections in neighbouring Gujarat, Modi’s home state, as four of the five killed farmers were Patidars, an influential community that has backed the BJP for decades but has in recent years shifted support.

“The BJP came to power with the promise of welfare of farmers and poor…All that the farmers were demanding was help from the government and in return they received bullets,” said Hardik Patel, a Patidar leader who led a weeks-long agitation seeking reservation in Gujarat last year.

Hundreds of farmers had gathered at Pipalia town in Mandsaur, 350 kilometres from state capital, Bhopal, as part of a 10-day-long demonstration for higher crop prices that cover their input costs, a loan waiver and a farm package to tide over losses incurred by drought.

Sources said many farmers were angry at the lack of government response and torched several vehicles forcing security personnel to fire at the crowd. Bullet injuries killed one on the spot and the wounded were taken to a local hospital. The rest died on way to hospital.

The state Patidar Samaj president Mahendra Patidar said the bodies will not be cremated till the chief minister Chouhan visits Mandsaur.

“The Mandsaur incident is very sad and unfortunate and has greatly distressed me. The administration was always given instructions to hold discussions with farmers and talk to the farmers participating in the agitation with understanding and in good faith. But anti-social elements entered the scene,” Chouhan said.

Congress parliamentarian Jyotiraditya Scindia also condemned the incident, saying it took place on the watch of a chief minister who “boasts of being a farmer’s son”.

Several farmers organisations called a stateside shutdown on Wednesday. Congress said it will support the strike.

Madhya Pradesh is considered a BJP bastion where the saffron party is in power for 14 years. But the government is facing snowballing protests by farmers, who say they cannot afford to sell produce at below-par prices for a third straight season and want the administration to create a safety net.