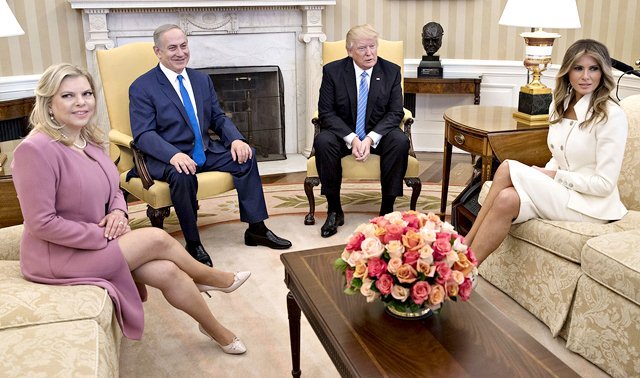 In an official press release by White House this morning, US President Trump reaffirmed unbreakable between the United States of America and Israel.

A picture of President Donald Trump and Benjamin Netanyahu is released with the Press Release which reads ‘ Stand with President Trump and Prime Minister Netanyahu ‘.

‘ President Donald J. Trump was delighted to have Israeli Prime Minister Benjamin Netanyahu as his honored guest yesterday, and is looking forward to strengthening the relationship between the United States and Israel.

President Trump has made it abundantly clear that the United States stands firmly with our ally Israel, especially in the face of terrorism. Our deeply rooted ties reflect our shared values, strategic interests, and dynamic economic and trade relationship. President Trump is making it his administration’s duty to promote Israel’s security in order to establish a more peaceful and prosperous Middle East.

Yesterday’s meeting represents a key step toward strengthening security and counter terrorism operations to protect the United States, Israel, and other nations from the growing threat of terrorism around the world. The President and the Prime Minister agree on the importance of tough sanctions and constant vigilance to ensure the safety and security of all.

As Israel’s largest bilateral trade partner, the United States is eager to expand its economic partnership, which is nearing $50 billion annually. President Trump reaffirms the unbreakable bond between the two nations, and together with Prime Minister Netanyahu, is finding new ways to make our alliance even stronger.