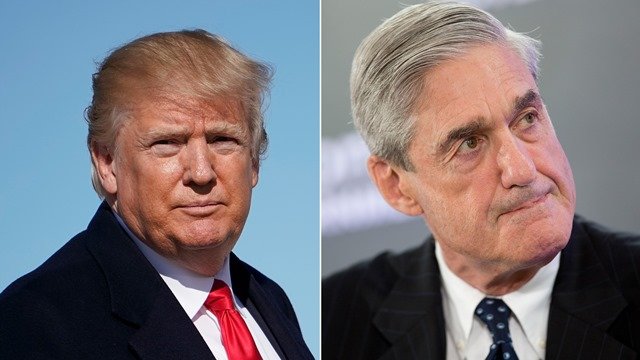 President Trump lashed out Tuesday over the apparent leak of a list of questions special counsel Robert Mueller is seeking to ask him in the federal investigation into the Trump campaign’s ties to Russia and the president’s possible obstruction of the probe.

“So disgraceful that the questions concerning the Russian Witch Hunt were ‘leaked’ to the media,” Trump tweeted. “No questions on Collusion. Oh, I see … you have a made up, phony crime, Collusion, that never existed, and an investigation begun with illegally leaked classified information. Nice!”

The president added: “It would seem very hard to obstruct justice for a crime that never happened! Witch Hunt!”

According to federal law, someone can obstruct an investigation of a potential crime even if that inquiry ultimately finds no crime was committed. In other words, someone only has to interfere with a federal investigation to be guilty of obstructing justice.

On Monday night, the New York Times published a report including more than 40 questions that Mueller would like to ask Trump. The Times said it obtained the questions, which were given to the president’s lawyers, from a person outside of Trump’s legal team.

Mueller, who has reportedly been seeking an interview with Trump for months, appears to want to know about a broad array of issues, including Trump’s thinking surrounding the firings of national security adviser Michael Flynn and FBI Director James Comey.

The questions also address Trump’s attacks on Attorney General Jeff Sessions, as well as the president’s knowledge of his campaign’s interactions with figures tied to the Kremlin. In particular, the special counsel is interested in the June 9, 2016, meeting at Trump Tower — arranged by Donald Trump Jr. with a Russian lawyer who offered “dirt” on Hillary Clinton.

“When did you become aware of the Trump Tower meeting?” Mueller reportedly wants to ask Trump, according to the Times.

The questions also indicate that Mueller is interested in what Trump meant when he declared in an interview with NBC’s Lester Holt that he had been thinking about the Russia investigation when he fired Comey.

“I was going to fire Comey knowing there was no good time to do it,” Trump told Holt shortly after Comey was ousted. “And in fact, when I decided to just do it, I said to myself — I said, you know, this Russia thing with Trump and Russia is a made-up story. It’s an excuse by the Democrats for having lost an election that they should’ve won.”

Mueller also reportedly wants to know what Trump’s purpose was for his tweet warning Comey of “tapes” of their conversations.