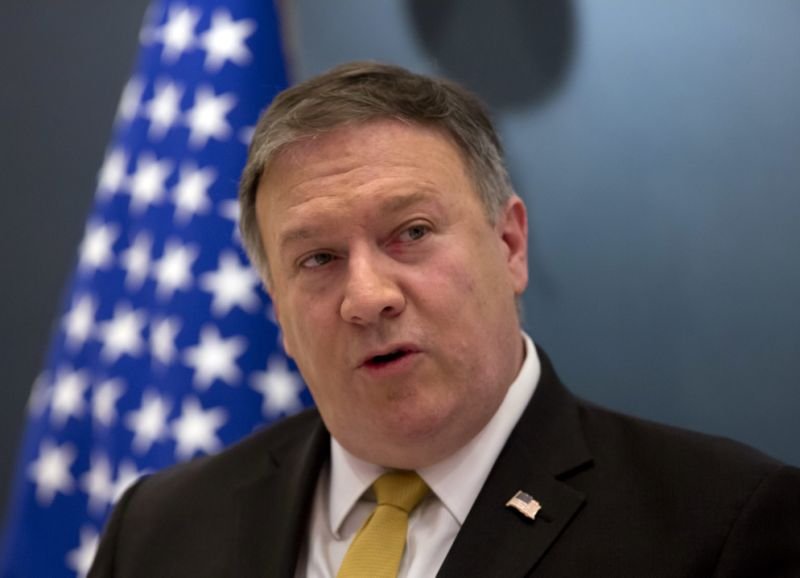 U.S. Secretary of State Mike Pompeo is strongly condemning the terrorist bombings in Afghanistan that killed 36 people in the capital and in Kandahar province.

Pompeo issued a statement calling Monday’s twin bombings in Kabul “senseless and barbaric” and he offered “our deepest condolences to the families and friends of the victims who injured and killed.”

He also noted that journalists were killed in the Kabul attack and said an “independent media is a cornerstone of democracy.” Nine journalists who rushed to the scene of the capital’s first bombing were hit by the second explosion, in the deadliest assault on reporters since the fall of the Taliban in 2001.

Pompeo praised the journalists for bravely pursuing their work and said that “despite today’s attack, the vibrant media landscape that has developed in Afghanistan will endure.”

The United Nations says Secretary-General Antonio Guterres “is outraged” by the series of terrorist attacks in Afghanistan that caused numerous casualties among civilians, emergency responders, school children and journalists.

Dujarric says in a statement that those responsible for Monday’s attacks in Kabul and Kandahar province “must be swiftly brought to justice.”

The spokesman adds that “the secretary-general extends his deepest condolences to the families of the victims and wishes a speedy recovery to those injured.”

The military said in a statement that “several” Afghan security forces were killed and wounded in the same operation Monday.

Gen. John Nicholson, the commander of U.S. forces in Afghanistan, said “their valiancy in battle, and that of the brave Afghan partners they fought alongside, will endure in our hearts and history.”

The statement says the wounded soldier is in stable condition.

The U.S. and NATO officially concluded their combat mission in Afghanistan in 2014, shifting to a counterterrorism and support role. Afghan security forces have struggled to combat the Taliban and an Islamic State affiliate.

IS claimed twin bombings in Kabul on Monday that killed 25 people, including nine reporters.

The BBC says one of its Afghan reporters has been killed in an attack in the eastern Khost province.

The broadcaster says Ahmad Shah, 29, had worked for its Afghan service for more than a year and “had already established himself as a highly capable journalist who was a respected and popular member of the team.”

BBC World Service Director Jamie Angus called it a “devastating loss” and sent his “sincere condolences to Ahmad Shah’s friends and family and the whole BBC Afghan team.” He says “we are doing all we can to support his family at this very difficult time.”

He was killed the same day a suicide bomber in the capital, Kabul, killed at least nine journalists.

The attack, claimed by the Islamic State group, was the deadliest to target journalists since the fall of the Taliban in 2001.

Romania’ defense minister says eight Romanian troops were wounded in an attack in southern Afghanistan after an explosion hit their vehicle in Kandahar province.

Mihai Fifor says the eight, from the “Carpathian Eagles,” were wounded on Monday when an improvised explosive device went off in the vehicle they were traveling in. A statement from NATO says the explosion occurred when a car bomb detonated in a densely populated area in Daman district.

Earlier, Afghan officials said the bombing targeted a NATO convoy and killed 11 children at a religious school located just by the roadside from where the explosion took place. At least 16 people were wounded, including NATO soldiers, Afghan civilians and policemen.

Gen. John Nicholson, commander of NATO’s Resolute Support mission, said “our thoughts and prayers are with those wounded, and with the innocent Afghans whose lives were needlessly taken from them by the enemies of Afghanistan.”

The statement added that the wounded service members, who are all in stable condition, were taken to Kandahar Airfield’s hospital for treatment.

Nicholson said that “if the enemies of Afghanistan think their cowardly actions will deter the commitment of the brave Afghan forces and our Resolute Support advisers, or the call by the Afghan people for peace, they are sorely mistaken.”

Media watchdog Reporters Without Borders says at least nine journalists were among those killed in a deadly attack in Afghanistan’s capital, and six were wounded.

Sediqullah Tawhidi, an official with the Afghan Journalist Safety Committee, also confirmed the nine journalist deaths among the 25 people killed in the double suicide bombing on Monday. Tawhidi had only five journalists wounded but conflicting tolls are common in the immediate aftermath of such attacks.

The Paris-based group named the journalists, working for media organizations from multiple countries. It said Monday’s double suicide bombing by the Islamic State group was the deadliest attack targeting reporters since the fall of the Taliban in 2001.

The group, also known by its French acronym RSF, says 36 media workers have been killed in Afghanistan in attacks by the Islamic State group or the Taliban since 2016.

RSF urged the Afghan government to do more to protect journalists. It said in a statement Monday it is formally appealing to the U.N. secretary general and wants the creation of a special U.N. envoy for protecting journalists.

An Afghan official says a suicide bomber targeting a NATO convoy in southern Kandahar province killed 11 children at a religious school located just by the roadside from where the explosion occurred.

The embassy says the U.S. “strongly condemns today’s savage bombings in Kabul. We extend our deepest condolences to the families, friends, and colleagues of all the victims, including a number of brave journalists among the dead and injured.”

It added: “Where media are in danger, all other human rights are under greater threat. We stand with the people and government of Afghanistan in their fight against terrorism.”

The Islamic State group has taken responsibility for the double suicide bombing in Kabul this morning that killed 25 people, including eight journalists.

The Afghan affiliate of the militant group, known as Khorasan Province, posted an urgent statement on an IS-affiliate website saying two of its martyrdom seekers carried out the double bombing on Monday targeting the headquarters of the “renegade” Afghan intelligence services in Kabul.

The statement did not say that journalists were specifically targeted but exaggerated the attacks’ death toll.

An Afghan spokesman has confirmed that five journalists working for local media have been killed, along with an AFP photographer, in this morning’s suicide attacks in Kabul.

The statement brings to six the number of fatalities among journalists in the Kabul bombings on Monday, which left 25 dead.

Wahid Majorh, spokesman for the public health ministry, says there are also wounded journalists among the casualties that have been taken to different hospitals in the Afghan capital. He did not have a total figure. At least 45 people were reported wounded in the attacks.

Afghan President Ashraf Ghani has strongly condemned the attacks in Kabul. A statement released form the presidential palace says that attacks targeting innocent civilians, worshippers inside the mosques, national and democratic processes, reporters and freedom of speech all are war crimes.

A Kabul police spokesman has raised the casualty toll from the double suicide attacks in the Afghan capital to 25 killed and at least 45 wounded.

The spokesman, Hashmat Stanekzai, says that along with the two journalists killed in the bombings — an AFP photographer and a cameraman for the local Tolo TV station — four policemen were also among those killed.

Stanekzai says the first suicide bomber was on a motor bike while the second attacker was among the crowd of reporters that rushed to the scene of the first attack, pretending to be one of the media.

He added that the second attacker then detonated his explosives while still among the reporters.